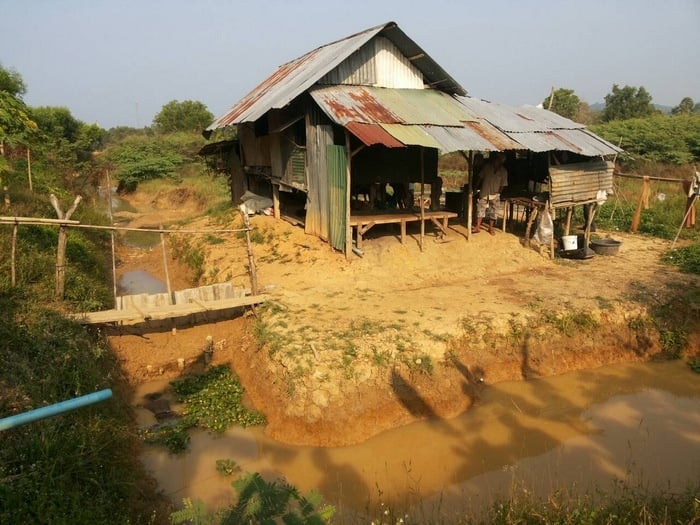 PHUKET: Police have yet to rule out murder as a possible cause of death for a man whose body was found in a small Phuket canal this morning, just meters from where he was drinking with recently made friends last night.

Officers arrived at the scene, near a shack behind Wat Baan Don in Srisoonthorn, at about 8:15am.

“The man’s body was still face down in the water,” said Lt Col Sanit Nukong of the Thalang Police.

“He looked to be in his 30s and he had a tattoo on his back. There was a small hand scythe nearby, pinned into the mud beside the canal.”

The man had suffered a small cut about two inches long, high on his right cheek.

“We do not believe that this small wound could have caused the man’s death,” Col Sanit said.

No identification was found on the body. The three men who live in a shack near where the body was found identified the man only as “Mr Tee”, a welder from Narathiwat.

Yok Muengdeng, 46, who owns the house, told police that Mr Tee recently arrived in the area.

“We don’t know his full name, any of his relatives or where he lived,” Mr Yok told police. “He told us that he was a welder for a company, but we don’t know which company.”

“He liked to come and drink with us, and stay over at my house. Last night after drinking together, we all went to bed.

“Mr Tee walked away, but we didn’t see where he went. This morning, the three of us woke up and started to go to work. However, we saw his body in the canal, and called the police immediately.”

Police are still investigating the cause of death.

“We are checking the knife for fingerprints. Mr Tee’s body was taken to Thalang Hospital for further examination while we continue our investigation,” said Col Sanit.