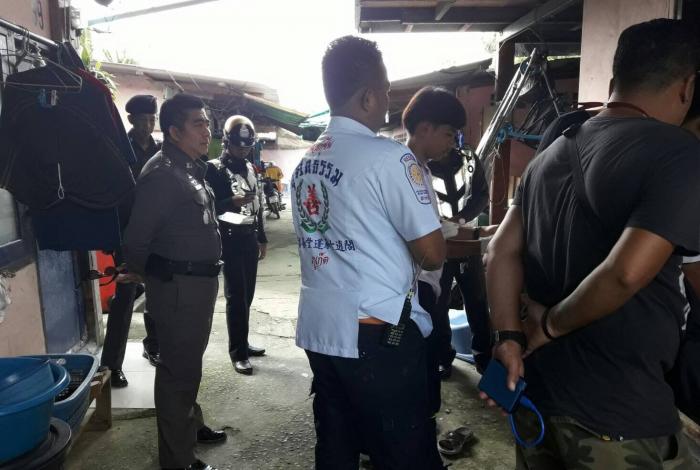 PHUKET: A construction worker was found dead in his room in Patong yesterday afternoon. Police are looking for his roommate, who disappeared after he was seen drinking with him Thursday night.

“We received a report at about 12:30pm of a dead man in a room on Pisitkoranee Road,” said Lt Sirinat Cherdchutrakulthong of the Patong Police. “When we arrived, we saw him lying face up, wearing a blue T-shirt and black shorts, with a bleeding wound on his elbow. Broken glass was littered all over the floor.”

The deceased is known only by his nickname ‘Petch’, as police could not find any identification documents on site.

“We found no signs of a struggle on Mr Petch’s body, who had died at least 12 hours prior to our arrival. On Thursday, a neighbor saw Mr Petch drinking with his roommate, named as Viset Kaenwong. When Mr Petch didn’t show up at work the next morning, a co-worker went to check in on him and found his body. Mr Viset, however, was nowhere to be found,” Lt Sirinat added.

The body was taken to Patong Hospital to determine the cause of death.

“At this stage we will wait for the results of the autopsy, and meanwhile look for Mr Viset to see if he knows anything. We currently cannot say whether or not he was involved in Mr Petch’s death.”