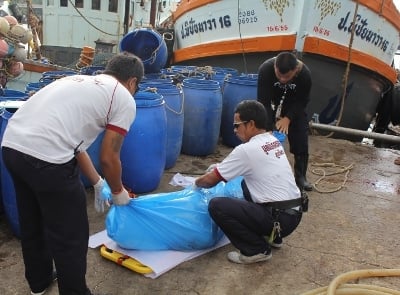 PHUKET: Police believe the stab-riddled body of a man recovered in the waters off of the Rassada Fishing Port this morning is that of a Burmese fisherman.

Phuket City Police at 7.30am received a report from staff at the Por Phichainava Company Pier, off Sri Sena Road in Rassada, about a body floating face-down just offshore.

Led by Lt Col Sien Kaewthong, police and Kusoldharm Foundation rescue workers raced to the scene, where they found a large contingent of Burmese fishing industry workers staring at the body.

After rescue workers pulled the body from the water, police investigators counted 13 stab wounds to his chest, abdomen and head.

No form of identification was found on the dark-skinned body, the age of which was estimated at about 35 years.

The victim, whose height was estimated at 165cm to 170cm, had an image of an eagle tattooed across his chest. The body was clad in a yellow, long-sleeved shirt and blue pants.

Police believe the time of death was about nine hours earlier.

“I presume the victim was a Burmese crew member aboard a fishing vessel. He was probably stabbed to death by an assailant, who then threw his body into the sea to conceal the evidence,” said Lt Col Sien.

Kusoldharm Foundation workers transported the body to the Vachira Phuket Hospital morgue for further examination and storage while police investigators attempt to uncover the identity of the man and his assailant.