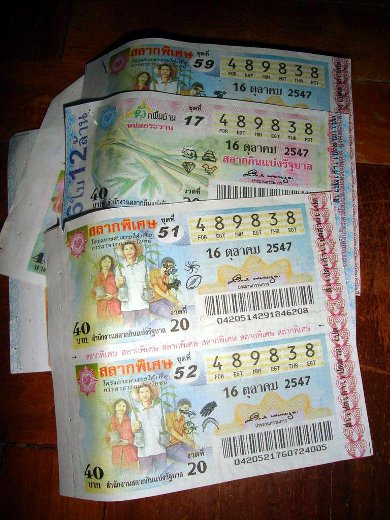 The winner, 35-year-old Kaewtaa Khan-asa, reported the win to Chalong Police yesterday, asking that her possession of winning ticket number, “904050”, be recorded in the daily log as evidence.

She said she normally never buys lottery tickets, but on Sunday, the day before the mid-month draw, she was approached by an itinerant ticket vendor who “asked for her support”.

Thinking little of it, she handed over a 100 baht note and selected a pair of tickets at random, never imagining she actually stood a chance of winning.

The following day she was overcome with joy to learn that her two tickets were now worth two million baht each.

Asked what she intended to do with the windfall, the ecstatic Mrs Kaewtaa said she was still so excited that she hadn’t yet given the matter any thought.

Man found dead floating in the sea with 13 stab wounds