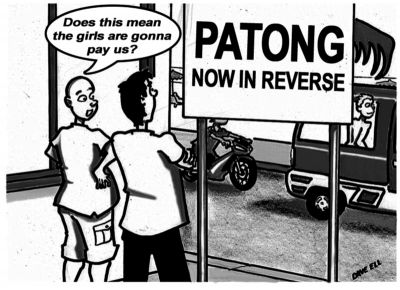 PHUKET: A plan by Kathu Police to reverse the flow along one-way roads in Patong is a good first step toward reducing traffic chaos in the town, but much more needs to be done to provide the millions of people who visit Phuket annually with the safe and affordable transport they deserve..

Put in place early in 2007, the one-way system immediately faced opposition from tuk-tuk drivers, who complained the increased distances they would need to drive would push up operating costs and eat into profits.

Much like their resistance to the 2005 establishment of Soi Bangla as an after-dark walking street, the opposition was relatively short-lived.

They soon responded in the time-honored fashion of all monopolists faced with cost increases – by passing them off to customers.

Kathu Police Superintendent Arayapan Pukbuakao is correct to point out that the existing ‘clockwise’ flow that requires drivers to ‘keep right’ along important east-west roads, like Soi Ruamjai and Soi Sawatdirak, not only creates confusion, but is also in violation of existing Thai traffic law. So obvious is the infraction that it comes as a surprise that no-one questioned its legality until now.

It is not just motorists who find themselves dangerously disoriented under the current scheme. Long-suffering pedestrians, already forced to run for their lives across three lanes of fast moving traffic on the main roads, are also at increased risk of getting run down on side streets, where they (quite reasonably) expect cars to be moving in the other direction. No wonder so many tourists in Phuket can be seen stepping off Patong sidewalks with the kind of trepidation known to soldiers in minefields.

Another hot spot that will benefit from the planned change is at the north end of the beach road, where vehicles turning right onto Phra Barami Road do so against oncoming traffic with no clear indication of who has the right of way.

Although details of the new plan have yet to be worked out, the Gazette agrees in principal with the change, which should be relatively easy to adopt by repositioning traffic signs and repainting road markers.

More difficult will be dealing with the traffic-paralyzing, and ever-worsening, flooding situation in Patong, much of it due to poorly regulated development along the new Phang Muang Road, Nanai Road, and well up into the Nakkerd Hills.

The ultimate challenge to solving the municipality’s traffic problems, however, is the ‘Tuk-tuk Club’. Until it deigns to accept some restrictions on parking and vehicle numbers, and to allow ‘baht-buses’ of the type enjoyed in Pattaya, we can be confident of continued chaos, danger and gridlock on the roads of Patong.

OPINION: A Phuket Perspective on the ‘Protests’