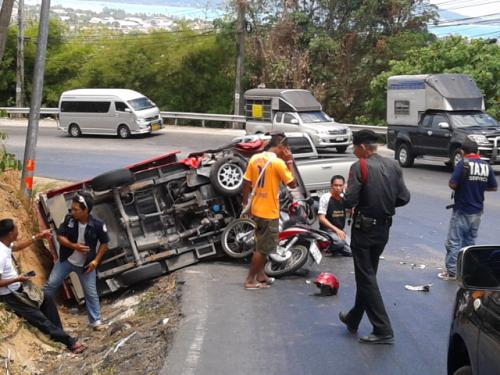 PHUKET: A pickup driver, a tuk-tuk driver and a motorbike rider all escaped serious injury yesterday when they piled into one another after the pickup driver slammed on the brakes to avoid a huge pothole on Kata Hill.

“The accident occurred near the sharp Sator Curve at about 12:20pm,” said Ruamjai Rescue Foundation emergency responder Sayan Thammaphan, who was among the first to arrive at the scene.

“The pickup truck driver told our rescue team that while he was heading down the hill towards Chalong Circle, he hit the brakes to avoid a hole in the road, which caused his pickup to spin out of control,” he said.

“The tuk-tuk driver behind him could not stop in time and rammed the back of his pickup, which caused the tuk-tuk to flip onto its side and slide down the hill,” Mr Sayan explained.

“The motorbike rider following behind the tuk-tuk could not stop fast enough and slammed into the tuk-tuk,” he added.

All three motorists suffered only minor injuries in the accident.

“The pickup truck and motorcycle drivers had bruises and scratches,” Mr Sayan said.

“The tuk-tuk driver had a cut on his eyebrow and scratches and bruises on his body,” he added.

The tuk-tuk driver, Kittisak Onphan, 45, was taken to Vachira Phuket Hospital in Phuket Town for further treatment, and later discharged from the hospital.