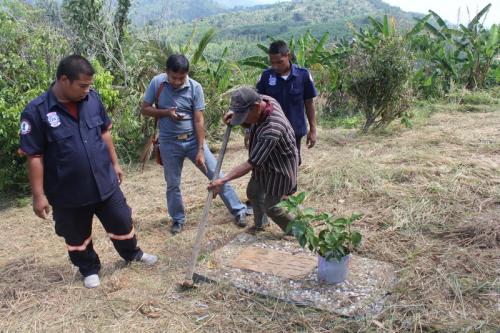 PHUKET: Following a report from local villagers that they feared a foreign expat was buried at a grave near the Big Buddha image in the Nakkerd Hills, Karon Police today trooped up the hill and exhumed the remains – only to find the body of a buried dog.

“At about 10:40am today, we received a report from a local plantation owner that he had found a grave marked with a rough gravestone on his land,” said Lt Sathaporn Seenoon of the Karon Police.

“He said that last month he came to cut the grass in the area and at that time he did not notice anything odd. This morning, however, he panicked after seeing the grave on his land,” Lt Sathaporn added.

A crowd had gathered at the scene, about 500 meters from the Big Buddha image, by the time the officers arrived.

“We dug about 60 centimeters to recover the body, which was covered with a white cloth. The smell was awful. Everyone started thinking it was probably the body of child.

“We uncovered the body, and then discovered it was the remains of a white-haired dog,” he added.

Relieved and somewhat bemused, the officers re-interred the poodle Tya to her final resting place before heading back down the hill to carry on with their daily lives.