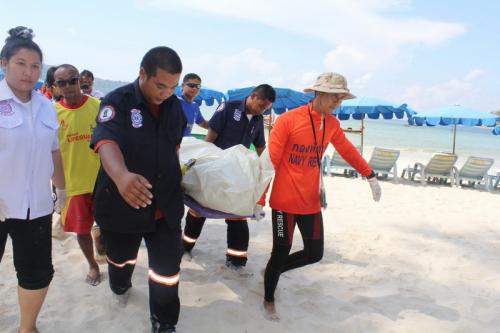 PHUKET: The body of a Russian man last seen spearfishing a few hundred meters offshore from Kata Beach on Friday was found washed ashore at the same beach (map here) this morning.

The body, still dressed in a wet suit and sporting flippers, was identified as that of 43-year-old Oleg Udaloi, Karon Police Deputy Superintendent Pachai Matthayan confirmed to the Phuket Gazette.

“On Friday, he and his wife hired a longtail boat to take him out to dive and spearfish near Koh Phu [Crab Island],” Lt Col Pachai said.

The longtail boatman called the Karon Sea Rescue Center for assistance. A search party was launched, but failed to find the missing Russian tourist.

“We found no signs of a struggle on the body,” Lt Col Pachai said.

“We believe he may have dived too deep and lost consciousness, or he may have developed a cramp while he was diving,” he said.

Mr Udaloi’s body was sent to Vachira Phuket Hospital in Phuket Town for a post-mortem examination.

“We will investigate further in order to establish the cause of death,” Col Pachai said.