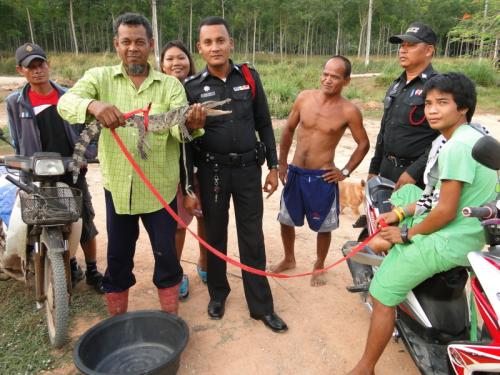 PHUKET: Decades since a freshwater crocodile was last spotted in the wild on Phuket, a local fisherman on Sunday accidentally landed a baby specimen while fishing in Srisoonthorn, in central Phuket.

Khamchit Sangsuwan, 32, a resident in the neighboring district of Kathu, went fishing at Baan Bang Jo canal. After two hours of luckless angling, the end of his line suddenly started jerking and there was much splashing where it entered the water.

Thinking he had caught a large fish, Mr Khamchit reeled in the baby croc instead, about 80cm long and weighing about 2kg, just before dusk.

Excitement whipped through the village as people came running to see the animal, but from a safe distance.

“The villagers tied its mouth shut with rope because the crocodile tried to bite them,” Thalang Police Deputy Superintendent Amnuay Kraiwutthianun.

“The crocodile was taken to Phuket Coastal Fisheries Research and Development Center in Wichit for safe keeping and for study,” Lt Col Amnuay said.