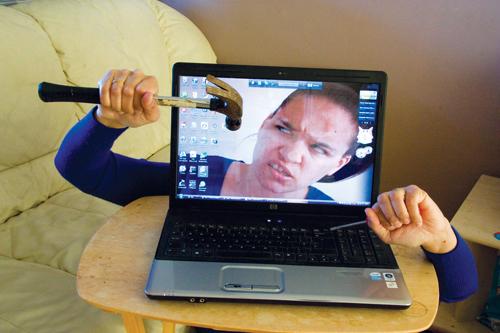 PHUKET: Many of my friends here in Phuket are in the process of changing their email addresses from blahblah@phuket.ksc.co.th to blahblah@phuketemail.com. Some of them have written to me, asking why a disruptive change like that is necessary, and looking for recommendations.

Can’t say I blame them: changing an email address is considerably more difficult, in this day and age, than changing a street address – and certainly belongs in the same category as changing a phone number.

Here’s what I’ve been able to piece together. Bangkok-based KSC was the very first Internet Service Provider (ISP) in Thailand. Hard to believe, but the company started in 1994 as a joint venture between CAT and a company called the Internet Knowledge Center Co, Ltd. Back in the day, KSC pre-paid dial-up internet cards were all the rage. The company gradually phased out dial-up, and finally moved to ADSL in 2004, if memory serves.

These days, KSC is still going strong, but I rarely see any mention of them in Phuket. They have a reputation in Bangkok for providing stable lines and good service, but I never hear anybody speak up about their speeds.

The ksc.co.th domain name was registered in 1999. It expires on April 16, 2015. KSC still has control over the domain name, and thus control over email addresses of the form blahblah@ksc.co.th.

A Phuket company by the name of ExpressData apparently had a contract with KSC that allowed ExpressData to hand out @phuket.ksc.co.th email addresses.

As recently as November, 2011, ExpressData was giving out instructions on how to use Zimbra open source email software to manipulate @phuket.ksc.co.th email addresses, which work with the website mail.phuket.ksc.co.th.

ExpressData Phuket is located around the corner from Makro. They also have offices in Phang Nga, Krabi, Hatyai, Cha-Am and Samui. As of 2011 (the last date mentioned on their web site), ExpressData’s “core network is direct-connected with the ‘Internet Backbone’ via Internet KSC, offers the highest performing internet connection with speeds up to 665Mbps (VSNL 155Mbps + TIG 200Mbps + IIG 310Mbps) for international network linkage, and 2.2Gbps for domestic. Total 77MB high bandwidth capability from Phuket – Bangkok via two major National Media Providers, UIH and TOT (45+32Mbps).”

I was told that KSC in Bangkok has decided to discontinue all email addresses with the form blahblah@[province name].ksc.co.th. I haven’t been able to verify that change, or talk with anyone in a position of authority at KSC, but it certainly seems reasonable.

Perhaps KSC has decided it isn’t making enough money out of their email addresses to keep the service viable.

Whatever the reason, ExpressData has registered the domain name phuketemail.com, and is now requiring customers with blahblah@phuket.ksc.co.th to switch to a different email address.

Then there’s the little problem of notifying hundreds of people that I regularly correspond with, and convincing them to update their contacts list.

It’s ugly. If I had paid for a service that came with an @phuket.ksc.co.th email address, I’d be livid at this point.

Which brings me to the point of this article. If you’re being put through all of this hassle anyway, why on Earth would you change your email address to blahblah@phuketemail.com? If a venerable, ancient email domain like phuket.ksc.co.th can get tossed out with hardly a thank you or fair thee well, why would you change to an address that could be tossed just as unceremoniously a year or two from now?

No disrespect to ExpressData, but they just registered the phuketemail.com site, through bulk licensing site Tucows.com, on January 9, 2013. The domain expires on January 9, 2014. While I don’t doubt that they have every intention of renewing the contract on the site, most companies register key sites for four years or more, if they can, just to lock in the name. Imagine what would happen to your mail if somebody forgot to renew the domain registration.

If you’re going to go through all of the hassle of changing your email address, why not change it to something that’s absolutely certain to be around for a while? Like, until the internet freezes over.

Go to gmail.com, and on the left, near the bottom, click on the link to Create an Account. Once you have a new blahblah@gmail.com email address, you might give Gmail a try, and drop your current email program whatever it may be. (Using Gmail has the added advantage of making all of your mail instantly available on an iPhone, iPad, Android phone or tablet, through various apps, or any place you can get an internet connection.)

But if you really want to use your current email program, there are detailed instructions for setting up Gmail.com accounts with any email program. Just Google “Gmail POP3” and the name of your email program, such as “Outlook,” or “Outlook Express,” or “iPad Mail,” or “OS X Mail.”

Similarly, signing up for a free Hotmail account is incredibly simple (although Microsoft now calls the service “outlook.com”). Just go to hotmail.com and follow the instructions. You’ll end up with an email address that ends in @hotmail.com, @outlook.com, or @live.com.

One bit of advice: when setting up a new email address, think hard about the name you’re going to use. I strongly advise that you avoid situations where people could confuse the number “0” and the letter “0” – for obvious reasons. Similarly, “1” and “I” are easy to mix up. Avoid names that are frequently spelled in different ways (is it Rawai or Rawaii?). Hyphens and underscores will drive your correspondents crazy. And most of all, keep your email address short, short, short.

The last thing you need is an email address that looks like phukets_best_diving-company_number13_years_running_on-the-sands _at_rawaii_beach@hotmail.com.

If you really want to take control of your email future, don’t sign up for a free account. Bite the bullet and register your own domain name. Imagine an address like Jim@phuketbestdive.com. It’s much cheaper and easier than you think.

Good news: contracts are almost in place for keeping Sandwich Shoppe Patong open for the foreseeable future. We’ll have a Sandwich Shoppe Express in Kata in the coming months. And watch out for a new kind of bakery in Kathu. Stay tuned for more info about our new locations, and computer gatherings, as events unfold.

On the menu: Phuket’s Le Versace takes it to the next level