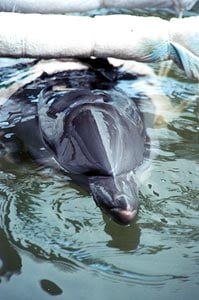 AO MAKHAM: Diamond the dolphin died on Sunday, just hours before a planned release back into the ocean at Patong. Rescued by villagers from the beach at Patong last month, Diamond (Jao Petch) had appeared to be recovering and biologists at the Phuket Marine Biological Center (PMBC) planned to free him today. The 1.83-meter striped dolphin (Latin name Stenella coeruleoalba) washed up on Patong beach on June 27. Villagers wrapped him in wet towels and carried him by pick-up to the PMBC. Diamond appeared to be recuperating but suffered a convulsion yesterday evening and died soon afterwards, Supot Chantrapornsyl, Marine Biologist at the PMBC, told the Gazette today. “I was contacted by Governor CEO Pongpayome Vasaputi on Friday about plans to release the dolphin at Patong beach today, because many people were asking about him,” K Supot added. An autopsy showed the lungs of the dolphin had turned black and its liver had hardened. “We presume that he died because of the lung problem,” K Supot said. “We gave him special food yesterday but he did not eat it, and stopped swimming. We used buoys to keep him afloat but eventually he had a convulsion and died.” The dolphin’s body will be examined more closely and possibly used for educational purposes.