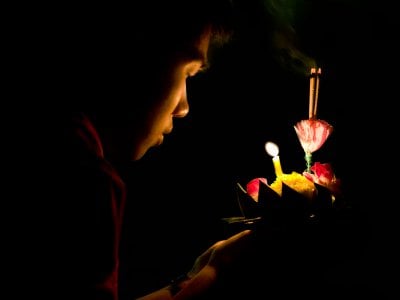 PHUKET: Tens of thousands of people are expected to turn out for Loy Krathong events to be held across Phuket on Sunday night, yet many young Thais seem to be losing interest in the tradition.

From Mai Khao to Rawai, floats adorned with flowers and alight with candles will be set adrift at sea, on canals, lakes and rivers to send off any traces of bad luck from the past year.

But many teenagers in Phuket told the Gazette the festival held little attraction for them. As recently as last week, some did not even know when the festival would be held.

“Loy Krathong in Phuket is so quiet. It doesn’t seem to have many activities to do or shows to go see,” he said.

Manit Onsuntipaup, 18, said lack of promotion may be the cause.

“It’s not like the Vegetarian Festival last month, which was more lively. I was told about it every day through TV and radio, but news about Loy Krathong is dead quiet. I still haven’t heard or seen any advertisements on TV about where or when events will be organized,” he added.

“It’s different from the Vegetarian Festival. I know when that festival is coming. I see the yellow flags with Chinese writing. But for Loy Krathong, it’s not clear when it will be on,” she said.

Suttikit Pikulpol, 14, likes the event but says he has to rely on someone to tell him when it will be on.

“I enjoy the event, but to be honest I don’t know when Loy Krathong is each year. I usually find out two or three days before, when someone tells me,” he says.

While many youngsters seem to be losing touch with the festival, others are happily keeping it alive and enjoy it as a family activity.

“I go to the festival with my parents every year at Suan Luang. It’s just another cultural event, but I can spend time with my beloved family,” said 14-year-old Jarupong Theeraprayoon.

“Mom and dad took me to Patong Beach last year. I think it is the best place to enjoy the event. It was fun,” he said.

In true Thai spirit, Loy Krathong not only centers on family but extends to the entire community.

“People in my neighborhood usually get together a few days before the event. We help each other to make krathong. It’s like our community activity,” said Naphat Satapoomin, 14.

“Once we have made the krathongs, we float them in the sea off Cape Panwa. We also sit down and eat together near the pier,” he said.

However young Naphat worries the festival might disappear, with fewer and fewer people thinking it worth taking part in.

“If we don’t help each other, the festival may disappear one day,” she said.