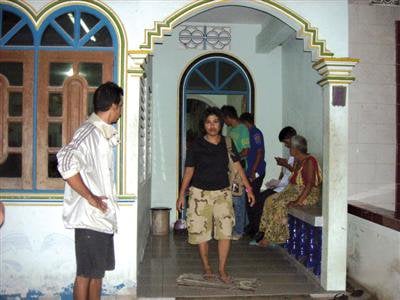 PHUKET: A man was shot dead in front of his mother in his Phuket home last night.

The victim’s mother told police her son answered a knock at the door of their home near the Heroines’ Monument at about 11:30pm.

As soon as the door opened a single shot rang out and Mr Nipon fell to the floor.

He was dead by the time Thalang Police arrived with Kusoldharm Rescue Foundation workers.

The mother said the shooter was among a group of people, but she could not tell how many.

Mr Nipon lived in the home with his mother and elder sister, who was out at the time of his murder.

Based on initial questioning at the scene, Capt Pratuang suspects Mr Nipon may have gone out drinking and got into an altercation with some local youths who shot him in revenge.

Romantic jealousy or a business dispute were unlikely motives, as Mr Nipon was a poor man and didn’t have any girlfriends, he added.

His body was taken to Thalang Hospital, but has since been claimed by the family who are arranging funeral services.