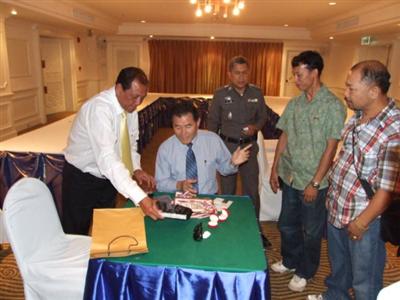 PHUKET TOWN: Will the owner of two newly-purchased women’s purses please step forward? The Phuket governor is holding them for you.

The handbags were among a small cache of items returned by an honest taxi driver in Patong last week. The purses were found in a paper bag along with two pearl rings, a pair of sunglasses and a slip indicating the goods were bought by credit card at a total cost of 5,600 baht.

The taxi driver, 41-year-old Thirathana Phuapadung, found the items in the back of his tuk-tuk on Tuesday morning and returned them to Phuket Governor Wichai Phraisa-ngop and Patong Mayor Pian Keesin the following day.

The driver told Gov Wichai he thought the handbags belonged to a couple he drove from Jungceylon to the Royal Phuket Yacht Club at Nai Harn Beach the night before.

Staff at the hotel have not had any reports of missing items and fear the owners may have written them off as unrecoverable.

“I always find items left behind by passengers, sometimes as often as five times a day. I always ask the taxi stand manager or police to help get the items back to the owner. Quite often the items are returned,” told Mr Thirathana.

“I am happy to do this. It is part of my job to be a good and ethical driver,” he said.

Gov Wichai said the driver’s actions would help Phuket’s image as a tourist destination, even if the value of the recovered items was not that high.

Phuket included in US travel warning