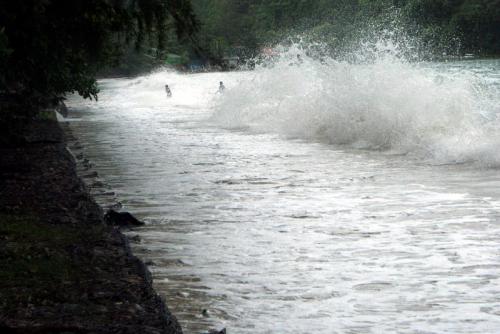 The move to resume tours to the islands in Thailand’s iconic boats comes despite warnings by the Thai Meteorological Department for small boats to stay on shore.

The decision follows damage to 77 longtail boats on Saturday, when they were capsized by big waves (story here).

Two people were reported injured and over 100 tourists were stranded on Hong Island.

“We sent a patrol boat out to bring them back to the mainland. All of them were safe,” he said.

Boat driver Somkid Laansun, 37, described the events: “After two hours of strong waves, there was a big wave three to four meters high, bigger than anything I’ve seen since the tsunami.

“Boat drivers jumped out of their boats to save their lives. After the sea calmed down, I saw about 60 boats that had been capsized,” he said.

“We have set up tables where people who suffered damage to their boats can file for aid. At this point about 50 people have filed,” Mr Thalerngsak said.