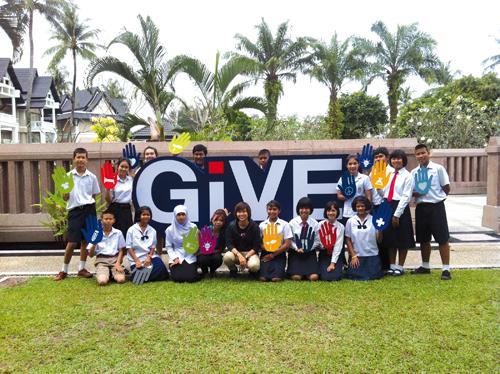 PHUKET: IT’S not only about rapid off-plan sell-outs for Sansiri Pcl; the real estate market leader is also known for setting the bar high in the realm of Corporate Social Responsibility (CSR).

Complementing the success of its Iodine Please and Sansiri Academy projects over the past few years, the property firm has raised the CSR standard yet again, setting a new benchmark with its latest brainchild: the “GiVE” social change campaign.

Reinforced through a continuing strategic partnership with UNICEF, and now endowed with the full cooperation and support of the Phuket provincial government, GiVE is an unprecedented initiative to extend a private and public hand, ear and most importantly – budget – to Phuket’s youth, who have already taken leaps and bounds to get the ball rolling in initiating much needed social change across the island.

Indeed, the GiVE initiative was created for the youth – and in large part, by the youth – in the name of the future of not only Phuket, but Thailand as a whole.

“As part of our commitment, we aim to take this model project and apply it to other provinces,” exclaimed Srettha Thavisin, President of Sansiri, who was speaking at a recent “Phuket Children and Youth Assembly”.

Held at the newly opened Pullman Phuket Arcadia hotel, overlooking Nai Thon beach on the north of the island, the aim of the assembly was to ‘open the mic’ for a select and fully-empowered youth committee, to exercise their voice with government officials, media and other members of the public and private sectors of Phuket.

Five topics were presented by the Thai youngsters, each needing government and private sector support, as well as media support to help raise awareness. The topics included: 1) the lack and dearth of warmth in the modern family unit 2) the need and importance of sea turtle conservation; 3) opportunities for youth to gain experience and skills as tourist guides and assistants; 4) the issue of littering and garbage degrading Phuket’s natural resources; and 5) the need for youth to retain and exercise their voice with elders, opinion leaders and policy makers.

Sansiri’s GiVE project aims to give children a voice in local government.

Having listened to five 5-minute presentations, Srettha thanked the youth and other attendees, and reiterated that social problems do not fall on any one person, company or sector.

“These are every-one’s problems. There- fore, we must all work together to fix the problems and move forward, together. The projects presented here today should be a good starting point for addressing and tackling some of the issues in society that arise with a growing and increasingly prosperous economy… that arise with the development of the well-being of everyone in the country,” he continued.

“This is especially relevant at this time, in which the government is planning to undertake a lot of infrastructure projects. If we don’t do something early on, then these problems will only accumulate and get worse with time. Sansiri is committed to working with all sectors in Phuket to support the youth in these projects so we can all move forward for the future,” he concluded.

“I would like to congratulate all those that have been selected as part of the ‘Youth Working Committee’ and who will be working closely with Phuket provincial authorities and the Phuket Governor’s office.”

Turning to the audience, Gov Maitri revealed, “The province has been working on this project with Sansiri for about five months now,” before going on to add some of his own wise advice.

“It all starts with knowing and thinking, then doing. Once [the issues are] known, the next step is to think and analyze [solutions]. Then, we can act and do something.”

Gov Maitri turned back to the youth committee: “You’ve all done well in presenting these five issues… as to how to move forward, you proposed, ‘through the kind support of the elders’. [You’ve] given me a list [of the issues and proposed solutions], however you may not know of all the burdens and restrictions of the government, such as a lack of [a sufficient] budget, for example.

“Nonetheless, taking action is only secondary to thinking, which is a very important part of the process, and depends on what you know,” he preached.

The Governor went on to stress the importance of moving forward, but only if the actions taken are sustainable.

“We’re not going to just talk about it, and when this seminar is over, forget about it. We must move forward, but sustainably.”

Adding to the five issues presented, Gov Maitri emphasized three more social issues that he thought were most urgent for Phuket youth – teenage pregnancy, narcotics abuse and [the lack of will for] conserving the environment.

“I hope that this session today will enhance and promote relations between youth and elders… and that everyone will join us to develop solutions in the near future. It is the force of the youth that will develop and build the country to be able to face and address global challenges. New tools and technologies, such as social media will prove instrumental in improving society.”

Following the assembly, Paniti Chantayasakorn, Sansiri’s brand communication manager gave an exclusive interview with the Gazette about the story behind the GiVE initiative. She explained that Sansiri started by approaching the Children and Youth Council of Phuket (PCYC).

Every province has such a council, which falls under the responsibility of the Ministry of Social Development and Security (MSDS), she noted.

“Youth representatives from the PCYC had a meeting with Srettha Thavisin in Bangkok. Srettha asked them, from the standpoint of youth who had grown up in Phuket, what they wanted to do for Phuket. Their response to us was that Phuket has become a society that is full of selfishness and taking from others, one that has forgotten about giving.”

This idea inspired the executives attending that meeting to change the culture from ‘take’ to ‘give’, and the campaign was born. In the first phase, instead of working only with the PCYC youth reps, Paniti explained that Sansiri decided it would be best to open up the opportunity for all Phuket youth to have a part.

“We initiated a road show to announce the campaign, visiting schools across Phuket. In two weeks, we had about 500 applicants,” she said.

In collaboration with the MSDS, Sansiri narrowed the list down to 30 – the cream of the crop.

“Next, we organized several two-day workshops which we invited various expert lecturers to lead using a ‘participatory learning’ model. These work shops ensured that the youth learned how to actively identify and address issues by going out into the community themselves, as to see the big picture.

A beach cleanup, as the kids learned, by itself does not really address the trash problem as the trash will eventually just build up again,” she explained.

In the second workshop, the students worked really diligently to identify various subsets and factors, organizing their efforts and dialogues with local residents into useful mind and community maps.

“For the third work- shop, we invited producers of popular Thai TV documentary programs such as Kon Kon Kon and Nok Kala to come down and teach the kids about how to make a good documentary – from script writing to filming and producing.

This allowed the kids to see the perspective of media and journalists. To make a good documentary, you can’t just spoon feed the issues to the audience, but have to raise

The future of Phuket’s residential market