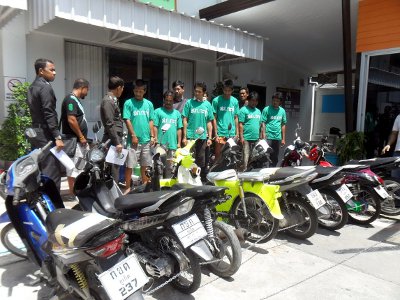 The Thai and Burmese suspects were presented at Kathu Police Station yesterday along with eight stolen motorcycles, parts of a further four or five bikes, mechanic’s tools, spray painting equipment, one stolen pickup truck and six other cars that are suspected as stolen.

Lt Col Thamsan Boonsong explained that the arrests had followed a string of reported car and motorbike thefts in Kathu.

Due to the high number of Burmese seen riding motorcycles, police believed the stolen motorcycles were being sold to Burmese laborers working on Kathu plantations.

Early yesterday, police stopped So Ong, a 36-year-old laborer, as he rode by on a motorcycle. After being asked to present proof of the vehicle’s registration, Mr So confessed that he did not have it and that he had bought it from Sor Au, a friend.

After following a trail and arresting two other Burmese workers and 35-year-old Songwut Kongprakob of Phuket, police were led to the house of Mr Sutat, the alleged gang leader.

As they arrived, Mr Sutat was painting a pickup truck that had been reported stolen by a foreign businessman while Saichon Phanomyai, 29, was sitting on the truck taking ya ice (crystal methamphetamine). Other stolen motorcycles and parts were found at the scene

Mr Sutat confessed that his gang were involved in vehicular theft as well as house burglaries. Some motorcycles were sold to Burmese laborers for 2,000 to 4,000 baht while others were broken down and sold as spare parts.

The men were charged with night theft, receiving stolen goods and possession of a Class 1 illicit drug.