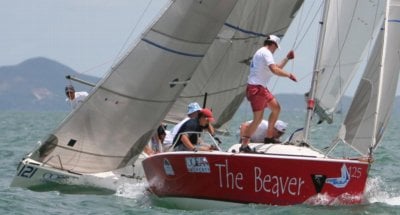 PHUKET: Local sailor Australian Scott Duncanson, better known in Phuket as owner and skipper of Somtam Express, which won Phuket Raceweek regatta last month, has compiled a crew to defend the title of National Platu champion at the national finals in Pattaya on August 13 and 14.

The crew are using the national Platu finals as a springboard for training for the Platu 25 World Championship 2007 to be held in Neustadt, Germany, from August 24 to 31.

Duncanson, an Australian who while onshore is Southern Regional Manager of PCS (Property Care Services), will again helm. Fellow Aussie and Phuket resident Anthony Gates, a professional yacht racer, will be the navigator and trimmer.

Retired engineer Brit Kevin “Ferret” Scott will run the foredeck of his 25-foot, Farr-design boat The Ferret that the crew will race on.

The underwriter for the crew’s entry to the natioanl finals and the world championships, Bangkok resident Ferret provided the boat The Beaver on which Duncanson and crew won the championship last year.

Australian Jerry Chase, a consultant for international law firm Siam Premier in Bangkok, will be on the mainsheet, while New Zealander and fellow Bangkok resident Trent Petersen will work the halyards.

“We’re not entirely the same crew who won the championship last year as some of the previous crew are not able to make the trip to Germany. New crew are Trent and Jerry, both are very experienced Platu sailors,” said Duncanson.

“We are using the nationals as a warm-up for the worlds,” he said.

PCS is sponsoring the crew’s entry to both the national finals and the world championship.

As the national finals and the world championship are strict “one-design class” competitions, Duncanson explained, there will be no technical advantage over other competitors.

“We do, however, have a brand-new set of Quantum Sails bought especially for the nationals and the worlds,” he added.

In the national finals, Duncanson expects the toughest competition to come from the Thai South East Asian (SEA) games team, sailing on Naiad.

“We have been acting as ‘tuning partner’ for them for most of this year. They have been training six days a week for the past two months and have a professional coach from New Zealand, John Weston,” Duncanson explained.

“They have improved immensely and have beaten us in the past two Ocean Marina mini-regattas in Pattaya. They will also be competing in the worlds, in Germany,” he added.

As for preferred conditions during the finals, Duncanson said, “Moderate winds of 7-12 knots are expected. However, as our total crew weight is right on the class limit of 400kg, we prefer fresher conditions of 12-17 knots.

“All competing crews are weighed before the event so most of the Ferret crew have been off the booze and on strict diets since Phuket Raceweek,” he said.

Joining the crew for the world championships will be New Zealander Aaron Taunt as tactician. “Aaron often sails on Somtam Express, he is a former Etchells 22 champion and he has a wealth of big fleet experience that our crew would otherwise lack,” Duncanson explained.

Looking forward, he said, “I guess it will be bloody cold! But seriously, as we will be sailing a chartered boat, are not local to the area, will be competing against many previous world champions and America’s Cup crews, it will be an uphill battle from the start.

“We are hoping to finish in the top half of the fleet and will be absolutely delighted with a top 20 finish,” he added.