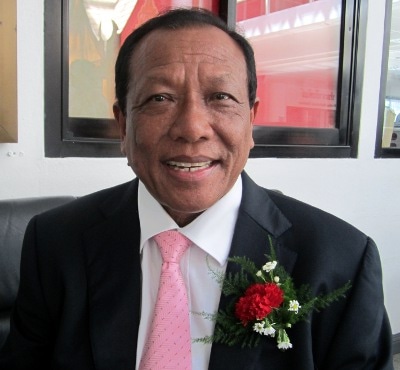 “I want to see real law enforcement on this issue. Land in Phuket needs to be preserved and its development planned with a long-term view,” Mayor Pian, who was born in Patong, told the Phuket Gazette.

“Sometimes it seems like the law is fighting itself. For example, some people have documents issued by the proper authorities to prove they own land on hills that are way above the legal limit to own or build on.

“But then law enforcement later comes along and orders these properties to be pulled down,” said Mayor Pian.

“The government must be consistent in this issue. They must reclaim all government land, not just pick bits and pieces that they want to target,” he said.

Mayor Pian also criticized the government for appearing to back off in its efforts to redress illegally owned land.

“The Government shouldn’t be hypocritical when resolving these problems. It appears they don’t like anyone who works conscientiously and is prepared to stand up to illegal land ownership,” he said.

“Take Damrong Phidet for example, the former Director-General of the Department of National Parks, Wildlife and Conservation. He was working on land encroachment but has since retired. We don’t know if the new chief will continue the investigation,” he added.

Mayor Pian’s comments also follow the sudden transfer of Dusadee Arayawuth from his position as the Secretary-General of the Public Sector Anti-Corruption Commission to a post as the Permanent Secretary at the Ministry of Justice, effectively removing him from his investigations into corrupt officials.

“I want to send a clear message to those who have the authority in these matters. Be fair to everyone, take the task seriously and be unrelenting in the pursuit of wrong-doing,” Mayor Pian said.

“Public land must belong to the public, not to one person or group interest. From the hills to the sea, if we can preserve national land in Phuket, then that beauty will survive for the coming generations,” he said.

During the meeting of the Patong Town Council, councilors elected Thanin Attasab as Council President. They also laid out their plan to publicly announce their policies to be carried out in the coming four-year term.

“I thought we had the power to go far….”

Live Wire: Is Phuket smart enough for the iPhone 5?