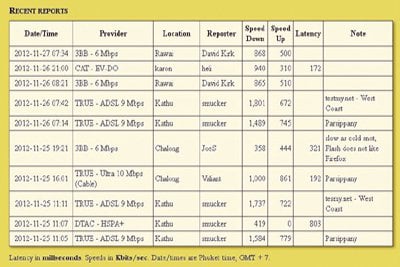 PHUKET: In the first installment of this series, I talked about the general state of internet connections in Phuket.

Last week, I covered the current offerings in land lines, with TOT Fiber 2U 10 Mega bits per second (Mbps) representing the best bang for your baht (sometimes; 1,500 baht/month), True DOCSIS “Ultra” coming in second (if you can get it; 599 bt/mo or 1,299 bt/mo for a moderately faster line), then TOT’s WiNet hybrid wireless-to-your-home (599 bt/mo), and finally all of the ADSL lines, which are generally indistinguishable from one another, and run 599 bt/mo.

While you’ll find advertisements for 20 Mbps or even 100 Mbps land lines in Phuket, it’s rare that we get a line that clocks much more than 2 or 3 Mbps consistently, judging by international single-threaded downloads (see: phuketinternetspeed.com).

Lately, even some of the Fiber 2U lines have slowed down to the point where they’re indistinguishable from plain-vanilla ADSL lines.

A speed of 2 to 3 Mbps isn’t bad: it’ll keep a Skype video connection going, and you’ll be able to see YouTube and other low definition video sources without much dropping or pausing. But, if you want to stream high definition TV, particularly if it isn’t cached in Bangkok, chances are awfully good that you’ll be disappointed with any line in Phuket.

This week I want to take a look at 3G wireless offerings in Phuket. I hate the term 3G because anybody can sell anything and call it “3G”. In Phuket, we had one telephone company that used the term 3G for a wireless internet service that’s not even close to the commonly accepted definition of 3G. That service is gone now, so I guess it makes a little bit of sense to talk about 3G in Phuket. I’ll begrudgingly follow the common parlance.

If you don’t understand the difference between 3G and WiFi, you aren’t alone. Many of the people who sell 3G and WiFi in Phuket don’t know the difference either. If you need a primer, I went over the main factors in my May 25 Live Wire column last year.

When you start looking at wireless connections, one of the first bits of terminology you’ll find is “3.9G”. Saints preserve us. Since there’s no real definition of 3G, you can rest comfortable in the knowledge that there’s even less of a definition for 3.9G. It’s all marketing flim-flammery.

In Thailand, the term 3G is synonymous with HSPA wireless technology. If you pay for 3G, what you’re actually getting is HSPA. There’s a greatly improved version of HSPA called HSPA+, and that’s what TOT calls 3.9G. While HSPA+, in theory, should run almost twice as fast as HSPA, the fact is that TOT hasn’t built out its infrastructure to support faster speeds. We rarely see 3.9G HSPA+ connections running any faster than 3G HSPA.

And all the fluff about 42 Mbps – the advertised speed for some 3G services in Phuket – it’s drivel. Utter fantasy. The technology may be theoretically capable of running 42 Mbps, in a lab. Our measured speeds out in the field here typically come in between 0.6 and 1.2 Mbps – and that’s both 3G and 3.9G. The speed varies greatly depending on your physical location: Phuket isn’t blanketed with 3G towers. If you get a slower connection, expect to have trouble connecting with Skype. If you get a faster connection, you can certainly watch YouTube videos on a phone or low quality tablet, but you may see a lot of drops and stutters on a 10-inch tablet, including the iPad.

Last week I talked about the dearth of information on the web about land lines: you can’t go to a vendor’s site, click a button or two, and see a full list of what’s offered and how much it costs. Same with wireless services. To get the latest prices, you need to physically go to a shop and ask.

One of the enduring, endearing features of 3G in Phuket is that the Thai government hasn’t figured out what it’s doing with 3G. As a direct result, not all 3G phones / tablets / USB dongles will work on a specific carrier’s channels. You should take your phone (tablet, dongle) with you when you buy a 3G package, and make sure that it’s working before you leave the shop.

Here are my recommendations for 3G package vendors, in order:

CAT My Click has a new HSPA+ network that isn’t really new. It’s the old TrueMove-H
network, which was bought and built by True subsidiaries, but then under terms of the obligatory contract reverted back to CAT. The big advantage? CAT sells the service for about half of what the other 3G companies charge: 590 baht per month.

Like all of the 3G vendors, CAT advertises that its package is “unlimited” but that’s ridiculous. Every “unlimited” package, regardless of vendor, has a limit to the amount of data you can download in a month – some 2 GB, some 3 GB, at least one has 4 GB, and after you download the maximum amount, your speed is cut back so severely you’ll think you’re using a tin can and string. Most people can get by with 2 or 3 GB per month, but only if they use the 3G connection for viewing YouTube videos or checking Facebook or email. Heavier use – including tethering a computer to your phone – will no doubt blow through the data cap in much less than a month.

TrueMove-H and DTAC both use the CAT network. As far as I can tell, all three networks work equally well (or poorly, depending on your location). The main difference: CAT is half the price of the other two. You may find that one of the three has a deal that you can use – a discount on the iPhone 5, say, or a Samsung Note II.

Sometimes True runs a discount on 3G when you buy TrueVision (formerly UBC) satellite TV service. But when it comes to the 3G network, they’re all the same.

AIS uses the TOT network. While CAT has had 3G service and towers in Phuket for years, TOT is a relative newcomer.

Although they seem to have good coverage, neither CAT nor TOT publish detailed maps that reliably tell you where their services drop off. As a result, you may find that either AIS/TOT or CAT/True/DTAC provide stronger signals in your particular location.

Prices are subject to change without notice – heaven knows the web pages won’t be updated – but as things stand right now, the wireless line speeds from all of the vendors are pretty close to identical, and CAT has a big advantage on price.

Next week I’ll step you through the procedures involved in getting a new internet connection.