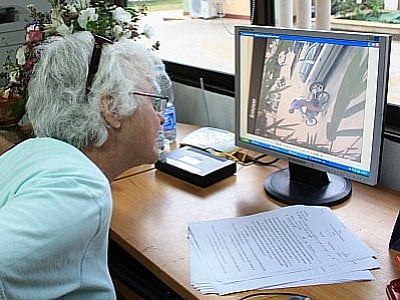 PHUKET: The mother of missing American Brett Bean was unable to confirm if images captured by CCTV cameras in Patong and Chalong show her son making ATM transactions after his disappearance in Phuket.

Lynne Bean, who posted a 50,000 baht reward to help find her son was asked to visit Karon Police Station today to try to identify a man who used her son’s ATM card on two occasions.

“We called in Mrs Bean to identify a man caught on CCTV using an ATM in front of a 7-eleven convenience store near Mae Ubon Market in Patong, and a second ATM at the Ha Yaek Chalong branch of the Siam Commercial Bank (SCB),” Karon Police inspector Chana Suttimard told the Phuket Gazette.

Mrs Bean arrived at the station at about 1pm and spent about an hour reviewing video footage and photographs provided by the police.

Lt Col Chana said that Mrs Bean was unsure whether the man caught on the CCTV film was her son or not.

“She said that while the man looks like her son, she could not positively confirm it, as the man in the film wore a motorbike helmet during the transactions,” the police officer said.

Mrs Bean asked police to allow her to send the files to her husband, Wayne, so he could attempt identification.

Col Chana revealed that Brett Bean’s SCB card was used to withdraw 2,000 baht in Patong on November 27. It was used again on December 5, when 1,500 baht was withdrawn from the ATM in Chalong.

“On both occasions the man wore a motorbike helmet with the visor up while making the transactions. After using the ATM in Patong, he entered the 7-eleven but kept his helmet on.

The unidentified man was caught on camera riding a motorbike that resembled the description of Brett Bean’s 125cc Honda. However, CCTV did not capture the number on the plate, Col Chana said.

“We must now wait to see if Mr Brett’s parents can confirm whether or not it is him in the CCTV. In the meantime we will continue to pursue other avenues of inquiry,” he added.