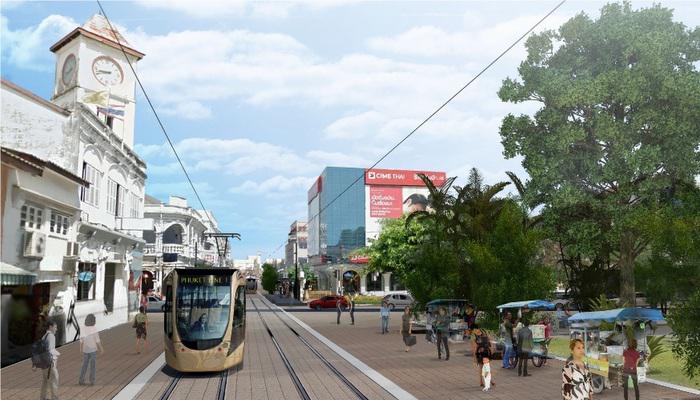 PHUKET: Plans proposing that Phuket’s long-awaited light-rail system travel through the heart of Phuket Town will be revealed at a public hearing next Tuesday.

Sirigate Apirat of the Office of Transport and Traffic Policy and Planning told the Phuket Gazette today that the proposed route for the light-rail will begin in Phang Nga, on the north side of the Bpark Phra Strait, which separates Phuket from the mainland.

A rail link from Phuket International Airport will join the network in Mai Khao, at the north end of the island, allowing travellers the option of heading south into Phuket Town or travelling north to Phang Nga.

The public hearing will be held at The Metropole Hotel to gather feedback from residents on the planned route, Governor Maitri explained at the meeting yesterday.

“Many local people have already agreed with the project in principle. However, some have concerns,” said Governor Maitri.

“For example, some people are worried that the light-rail passing through Phuket Old Town might affect the residents’ daily lives, especially if the light-rail is to travel along the narrow streets – it may cause severe traffic problems.”

The light-rail project ground to a halt in 2012 when Bureau of Regional Transport and Traffic Promotion pointed out to Phuket officials that by law it could not accept any feasibility studies by private companies that were not specifically commissioned by the government (story here).

At the meeting yesterday, however, Governor Maitri introduced the six Thai companies now hired by the Office of Transport and Traffic Policy and Planning to conduct a feasibility study that will cost 118 million baht.