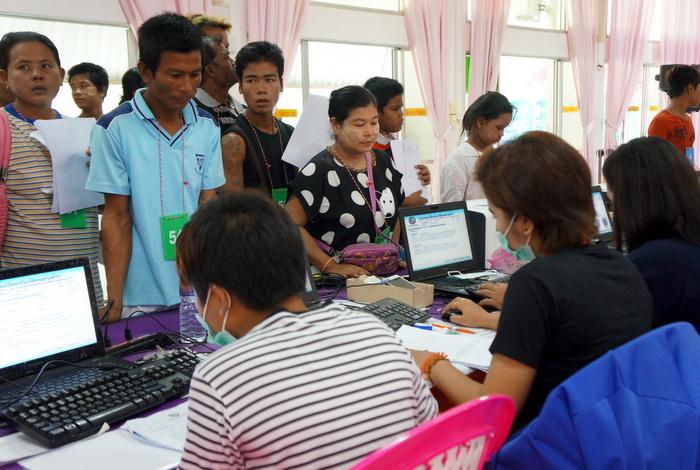 PHUKET: Immigration officials are calling on employers of illegal migrant workers to register their employees before a grace period ends this month.

The registration drive is part of a nationwide campaign to legalize unregistered migrants from Myanmar, Cambodia and Laos working mainly in the country’s construction and fisheries industries.

The registration period ends on July 29.

Construction workers must have either a passport or ‘pink’ ID card to register. However, those working in the fishing industry and at seafood processing plants who do not have those documents can still register at the center.

“I would like to call on all employers of migrant workers to come and register in time, otherwise they will be liable for prosecution,” Ms Sukrita said. “At the moment the government is being flexible with employers and illegal workers.”

Law enforcement officers have largely suspended immigration raids and their detainment of illegal immigrants for the past month.

Thailand’s fishing industry, which has an infamous history of employing migrant laborers, has extended deadlines, with employers having until July 31 to register their workers. The PPEO stated those workers will receive a ‘one-year’ work permit that would retroactively cover them from February 2, 2016 until January 31, 2017.

Workers involved in the country’s substantial seafood processing industry – which warranted a visit this month from Burmese stateswoman Aung San Suu Kyi (story here) – were able to register with the Department of Labor from February 23 until August 22.

Non-fishing industry employers, including construction companies operating in Phuket, have to register all of their migrant laborers by July 29 in order to apply for a two-year permit.