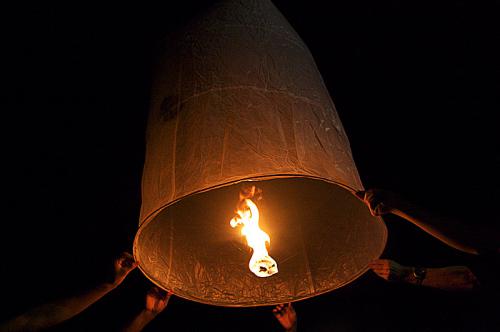 PHUKET: Airports of Thailand (AoT) Phuket warned those celebrating Loy Krathong today that releasing lanterns in the Air Safety Zone surrounding the international airport could result in charges carrying a sentence of up 20 years imprisonment or death.

The hefty penalty is cited in Thailand Air Navigation Act, BE Section 6(3).

“People like to release lanterns during Loy Krathong, especially people staying at hotels or in areas where celebrations are being held,” Acting Director of Phuket International Airport Kanputt Mungklasiri said. “However, we are worried that they could cause serious damage to low-flying aircraft.”

Cap Kanputt explained that he was concerned that the modern renditions of these traditional lanterns could get caught in the engine of an airplane.

“In the past, lanterns were made of wood and paper. But now, people have developed larger lanterns that last longer and go higher,” he said.

People are asked not to release lanterns in the following areas in Thalang:

Special Report: The ongoing battle for a place to call home