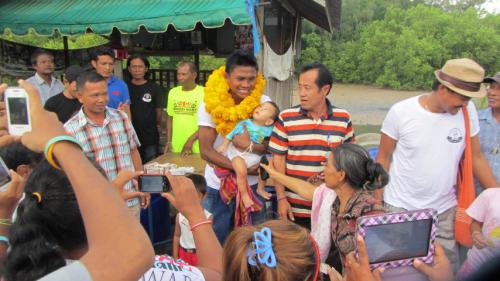 PHUKET: Phuket fight fans will have an opportunity to watch legendary MuayThai fighter Buakaw Banchamek in action in Patong… tomorrow night (November 18), in a special exhibition match at the Patong Boxing Stadium on Sainamyen Road.

Buakaw, a two-time K1 World Max champ with well over 300 fights, is far and away Thailand’s most famous currently-active pugilist. In the Patong event, the chiseled 31-year-old from Surin will take on not one, but two opponents in a special exhibition of the gloves-off form of ancient Muay Thai. His two opponents will be Kaolanlek and Paosee, both fighters from the well-known Kawvichit camp.

The exhibition will be the main event of an exciting card that will include eight real fights with Muay Thai fighters representing Australia, China, New Zealand, South Africa, Japan and Sweden, as well as Thailand.

The action gets underway at 9pm. Ringside seats are 3,000 baht, with general admission seating at 2,500 baht.

Buakaw, who has been boxing since the age of eight, held a special promotional event at the Saensook Community near Saphan Hin in Phuket Town yesterday afternoon.

After posing for pictures, distributing milk and doing a focus pad demonstration with his trainer for the excited locals, he sat down for an exclusive interview with the Phuket Gazette about his plans for the future.

The interview will appear in the sports section of the Phuket Gazette’s next edition, which will hit the newsstands on November 23.

A weigh-in for all the fighters will take place at 7pm this evening at the Baan Laimai Beach Resort, followed by a caravan parade around the streets of Patong.

Lanterns not cleared for Loy Krathong lift-off in Phuket