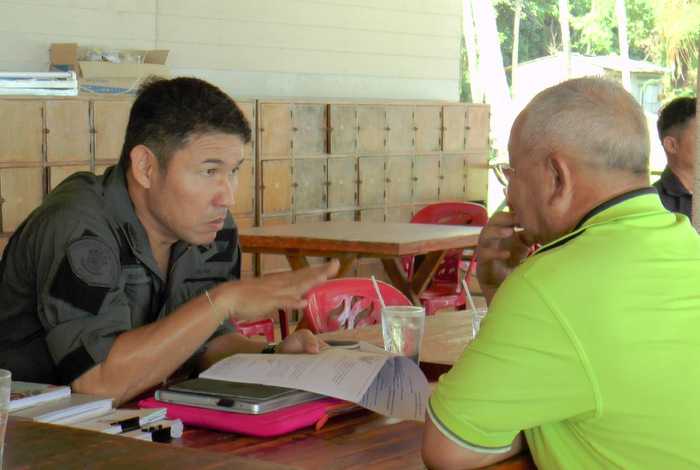 PHUKET: A team of police officers from the Natural Resources and Environmental Crime Suppression Division (NED) arrived on Koh Naka, off the east coast of Phuket, yesterday to investigate a complaint of illegal encroachment on public land.

However, the officers, led by Lt Col Sutthinan Kongchamdee, found themselves amid a confounding spat over private land leased out by the same holding company that claims to own more than 33 rai on the small island – a claim that is already under investigation for encroaching on public land.

The complaint that Col Sutthinan was investigating yesterday alleged that local village chief Thavorn Torthip had allowed seven people to operate businesses renting out beach umbrellas and that these operators were blocking access to a local restaurant.

“The land belongs to Ngantavee Co Ltd, which has a NorSor 3 Gor [land-use document] covering 33.2 rai,” said a Ngantavee representative, who asked not to be named.

“We asked Mr Thavorn to take care of this land…” the representative explained, but did not elaborate on any financial arrangements between Ngantavee Co Ltd and Mr Thavorn.

He then clarified that it was Ngantavee Co Ltd that had allowed the seven people to rent out umbrellas on the land, not Mr Thavorn.

“And we allowed the seven local people to operate umbrellas on the land,” the representative continued.

After hearing the testimonies of all involved, Col Sutthinan ordered that the beach umbrella operators cease work until the Land Office confirms the boundaries of the land owned by Ngantavee.

“If the land is confirmed to be privately owned and not encroaching on the beach, the operators will be allowed to return,” he said, much to the dissatisfaction of the operators.

However, Col Sutthinan allowed the restaurant to continue to remain open.

“The restaurant can continue operating, but Pa Khlok Municipality officials must confirm whether or not the restaurant was legally built.

“The venue must be at least 20 meters from the high-tide mark, but other than that – if the restaurant is on private land – there is nothing we can do about it.”

Col Sutthinan called on all parties to the abide by the law and to cease their bickering.

“All this is up to government officers, and I want no further arguments,” he said.

“I want to see everyone living happily together. We cannot satisfy everybody, but if we all follow and accept the same rules, there will be fewer problems in our community.”

From Sweden with love: Cyclists on final stretch to Phuket tsunami orphanage