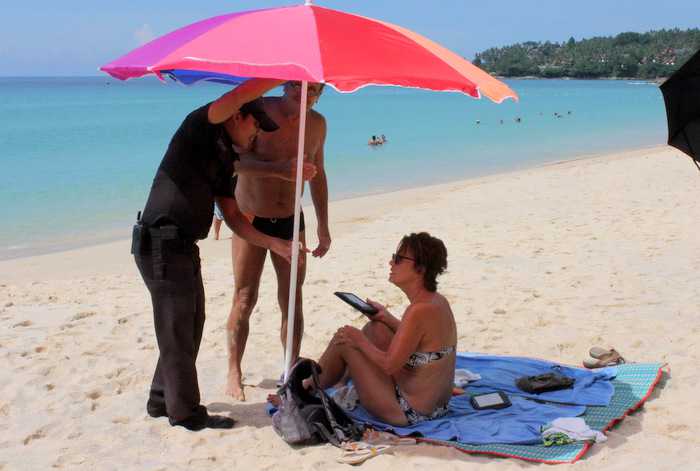 PHUKET: The chief of the local authority governing the beaches in Cherng Talay has called for tourists to bring their own umbrellas and beach mats to enjoy on the sands.

“For now, tourists are allowed to bring their own umbrellas to the beach,” said Ma-ann Samran, president of the Cherng Talay Tambon Administration Organization (OrBorTor).

“Mats are allowed too, but not sunbeds. There must be no services provided by local vendors on the beach.”

The public announcement by the official followed an angry reaction by tourists and local vendors during a beach cleanup operation gone wrong at Surin Beach yesterday.

During the Army-led foray onto the beach, one angry tourist tossed an umbrella into the sea.

The act evoked cheers from disgruntled vendors who were the intended targets of the operation.

However, the mistimed enforcement of the now-revoked ban on beach umbrellas was short-lived. Navy personnel were soon on the scene to explain that the ban had been lifted just hours earlier by the order of Vice Admiral Sayan Prasongsamrej, commander of the Royal Thai Navy’s Third Area Command (story here).

The beach-clearing exercise followed a meeting of Mr Ma-ann with former local beach vendors who have not worked since the beach cleanup campaign ordered by the National Council for Peace and Order (NCPO).

The meeting was held, in short, to make it clear to the controversial beach vendors that the ban on the provision of any of their services on Phuket’s beaches was still in place, including the renting out of umbrellas and chairs, massage services, and hawkers walking the sands selling food, drinks or trinkets.

However, Mr Ma-ann also confirmed that vendors were allowed to operate on land near – but not on – beaches regulated by his Cherng Talay OrBorTor.

“I take the order from my superiors,” Mr Ma-ann explained. “Please understand that it is beyond my authority to allow local vendors back on the beaches.

“This is the best I can do until any new official orders are announced by the governor.”

Local vendor Chai Singkaew, who used to rent out umbrellas, said he appreciated the gesture of being allowed to operate his business on government beachfront land, but called for restoration of his previous status as a vendor on the beach itself.

“We can now sell goods at a site provided by the OrBorTor, which is better than nothing,” he told the Phuket Gazette.

“But we have not been working for more months,” he admitted. “We cannot afford to make payments on our houses and cars. We just want a place to earn a small living to support our families.

“I want to see officials allow us to work on the beach again, and we hope that they do not plan to allow big business operators to replace us.”