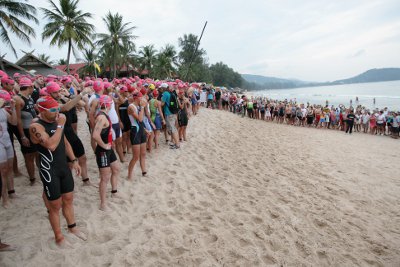 PHUKET: Entries for the Laguna Phuket Triathlon (LPT) tomorrow have raced beyond the 1,000 mark for the first time since the inaugural event in 1994.

This record number of participants is a confirmation of Phuket’s reputation as one the most popular triathlon destinations in Asia.

Sunday morning will see a total of 1,078 athletes from 41 countries jostle for position at the start line with 985 individuals and 31 relay teams all vying to complete the “Race of Legends”.

The “Race of Legends” title is a tribute to the triathletes who have contested the past 17 Laguna Phuket Triathlon events. With a professional field that includes Alberto Cassadei, Edith Niederfriniger, Frederick Croneberg and Katje Rabe, this year’s event continues to inspire these exceptional athletes to compete.

Massimo Cigana from Italy will defend his 2010 title and hopes 2011 will be his third LPT victory having also won in 2007. Cigana also hopes to beat the course record of 02:24:56 set in 2009 by Olympic gold medalist Jan Frodeno of Germany.

Granger finished as runner-up to Vodickova in that race two years ago, so an exciting encounter is on the cards.

LPT is also renowned for the achievements made by the hundreds of amateur triathlon enthusiasts who assemble for sporting camaraderie and their own personal challenges.

Among the 985 entries Hong Kong leads the field with 260 while Thailand has 217 entrants, reflecting the nation’s growing enthusiasm for this sport.

Victor Kirstein of Denmark is the youngest competitor in the male line-up at 18 years old while at the other end of the age spectrum is 74 year-old Wilf Deck of Australia.

In the female category, 18 year-old Lauren Smith of Australia ought to be impressed by fellow triathlete Lenore McLaughlin of the USA who will show her athleticism at 62 years young.

Australian Brian Hardaker, 62, returns to compete in his 17th LPT.

Phuket Gazette readers will be keeping an eye on the progress of Tim Haddon, director of golf at Laguna Phuket Golf Club – who have followed Tim on a six-month fitness regime during which he has struggled through injuries, and shed 13 kilos in a bid to compete in his first-ever triathlon.

The Phuket Gazette sponsors the Laguna Phuket Triathlon and wishes all competitors the very best for the 2011 event.