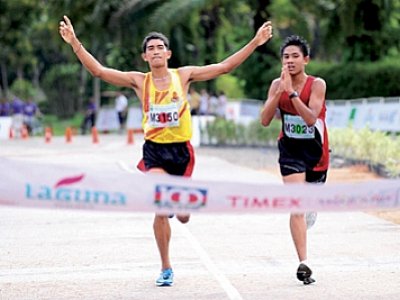 PHUKET: Hundreds of runners from around the world will ‘Run Paradise’ in the seventh annual Laguna Phuket International Marathon on Sunday, June 10, to help stamp its status as Asia’s fastest growing family-friendly destination marathon.

International registrations opened in October and since then entries have surged ahead of the same period last year, with total international entries now close to 1,000.

Event Director, Roman Floesser, of organiser Go Adventure Asia, said: “We encourage runners to enjoy the scenery and have a fantastic race experience instead of pushing themselves to achieve personal best times,” he said.

“It’s all about participation and having fun in a great atmosphere,” Roman added.

Local entries opened on April 1 to great enthusiasm and the final number is expected to exceed last year’s record of nearly 5,000 participants from 45 countries. The biggest international group so far is Japan, with more than 200 runners, followed by Singapore (96) and Hong Kong (78).

The phenomenal Year-on-year growth since its inaugural event in 2006, which had less than 2,000 runners, makes Laguna Phuket International Marathon Asia’s biggest and fastest growing destination marathon.

Its ‘Run Paradise’ tagline is an apt description, with runners of all ages and abilities on a mainly flat course that takes in rubber and pineapple plantations, beach views, local villages and the tropical lagoons of Laguna Phuket, Thailand. In essence – a family-friendly carnival atmosphere.

As well as the full marathon there’s a 21.1km half marathon and 10.5km run, with families catered for with the 91.5FM 5km community walk and 2km children’s race.

A two-day expo with sponsor booths and fun activities around Laguna Phuket will stoke the carnival atmosphere.

Runners are encouraged to take part in fundraising for Laguna Phuket’s community initiative to support local schools with a new Mobile Library Learning Centre to bring much needed reading and educational resources to remote rural schools on a
routine basis.

Online registration can be completed until June 2 with accommodation deals at Laguna Phuket hotels also available.

For more information on registration visit PhuketMarathon.com or LagunaPhuket.com. The Phuket Gazette is a sponsor of the Laguna Phuket International Marathon.