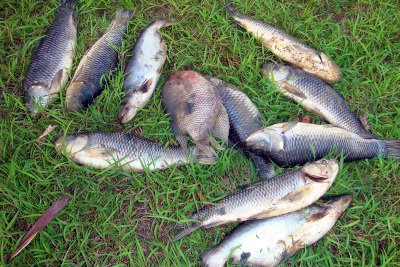 PHUKET: Reports of Phuket Town residents panicking yesterday, fearing that the dead fish found in canal were an omen of an impending tsunami strike, prompted officials to investigate.

The brackish water of the mostly dry Klong Saensuk canal, which runs past the Seahorse Circle at the east end of Ong Sim Phai Road, had about 10 kilograms of dead freshwater fish in it, said Phuket Fisheries Office chief Kavi Saranacomkul.

“Yesterday evening, our officers inspected the klong, because many people were panicking. They thought the dead fish were an omen that another tsunami would hit Phuket,” Mr Kavi told the Phuket Gazette.

“All of the dead fish were freshwater fish, such as bleeker, seven-striped barb and nile tilapia. We believe they escaped from fish farms nearby,” he said.

“They died because they are freshwater fish and could not survive in the brackish water. Yesterday, brackish water marine life in the klong was just fine,” Mr Kavi explained.

“There is no need to panic, or to misinterpret this as a tsunami-warning omen – there is nothing to be worried about,” he added.

Some of the fish were taken by local residents to cook or sell, resulting in a traffic jam in the area.

“Somebody put the fish into the canal. Some of them had been frozen, I can tell,” he told the Gazette.

“There is no need to panic – they really are just dead fish that were thrown away,” he added.