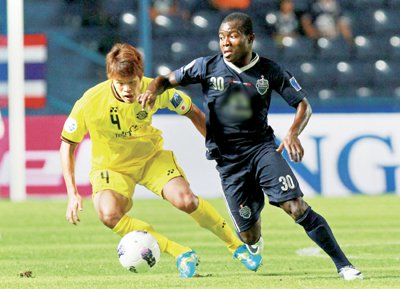 Now level with the Koreans on six points in Group H – the pot of death, Buriram’s good start in March was highlighted by upsets over J-league champions Kashiwa Reysol (3-2) and Chinese champions Guangzhou Evergrande (1-2).

Even though Buriram have a better goal difference than Jeonbuk (-1 to -5), the K League champs prevail in 2nd due to their better head-to-head record, as dictated by AFC Champions League regulations.

In their latest bout on Tuesday, the Thai Thunder Castle were determined to earn an away-match draw point with two brilliant goals by Cameroonian import Frank Ohandza (20, 55 minutes) to match the double score from Jeonbuk’s Lee Dong Gook (25, 27).

However, a strike by Jeonbuk’s Park Won-jae with only 10 minutes left in regulation ensured that the Koreans would be due the final cheer, complementing their two goal shutout at Buriram a few weeks earlier.

To conclude group stage play, Buriram travels to Japan next to play their final away leg against Kashiwa Reysol on May 1 (5pm in Thailand, 7pm in Japan) in what will no doubt be a tough contest.

Following their devastating 3-1 loss at Guangzhou, the J-league champs are yearning for vengeance against Buriram, and will have the backing of nearly 16,000 fans in what is expected to be a packed Hitachi Kashiwa Stadium.

The “Sun Kings” may have had a slow start this stage, but if they play anything like they did on March 21 when they humiliated Jeonbuk five goals to one, then Buriram is cut out for a difficult task to gain any points for this meet.

On the same day, group leaders Guangzhou will host Jeonbuk, with advancing stakes equally high for each contender.

The final matches will be on May 15 with Buriram to host Guangzhou, and Jeonbuk to host Kashiwa.