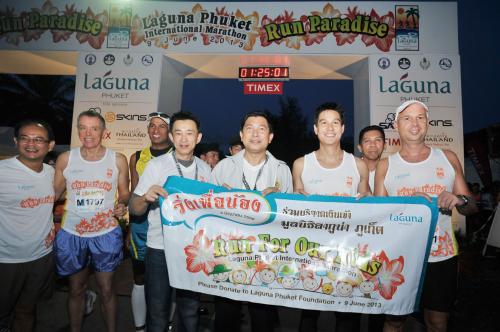 PHUKET: Michael Page of the UK won the eighth Laguna Phuket International Marathon (LPIM) when the annual running festival took to the island’s roads over the weekend.

More than 4,000 entrants of all ages and abilities from 45 countries competed on a variety of distance courses in an atmosphere of community fun and charity fund-raising.

His winning LPIM trophy represented a partnership with a new sister race – the Italian 10km Igrani Run – in an initiative by Laguna and sponsored by the Tourism Authority of Thailand (TAT), which also sponsors the Igrani Run. The trophy was presented by TAT Rome marketing director Sandro Botticelli.

In the half marathon, Thai TV star and aspiring marathoner Krittapas “Krit” Sakdidtanon – the event’s Charity Ambassador – was accompanied by a fund-raising team in a ‘Charity Caravan’ and delighted locals in villages and markets along the course by stopping to collect donations for the Laguna Phuket Foundation.

Funds raised went to LPIM’s ‘Run for Our Kids’ drive, which aims to raise one million baht for the foundation, which will be used to support of local schools and communities

Other personalities who competed in LPIM – rounded out by a 10.5km run, the 91.5FM Community Walk and a 2km Kids’ Run – included Australian ‘Couple on the Run’ Andrew and Sue O’Brien, who have run some 80,000 kilometers side-by-side at marathons and ultra-marathons around the world; and 79 years-old British veteran Robin Wilson, LPIM’s oldest 42k runner and one of the last home in seven-and-a-half hours to chalk up the 400th marathon finish of his running career.