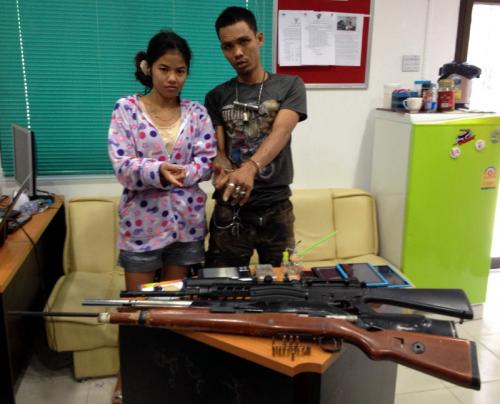 PHUKET: Two gun-stashing drug dealers were scooped up on Friday in the wake of a drug bust that netted a Swedish national in Karon last month.

Mr Nattharin was found based on information supplied by dealer Rungruang Kwanthong, 37, who had in turn been fingered by Swede Jen Peter, 48, and Kwanpana Thani, 29, who were arrested on drugs charges on May 8 (story here).

Police officers on a routine patrol in Karon stopped Mr Hasachai and Ms Suvimon and searched their motorbike. After finding 1.82grams of ya ice (crystal methamphetamine) under the seat, police accompanied the pair to their room at Patok Soi 1 and discovered three guns and ammunition, said Karon Police Deputy Superintendent Sophon Borirak.

Mr Hasachai confessed that he had purchased the drugs from a friend who lives in Rawai to sell to tourists in the Karon area, Lt Col Sophon said.

During police questioning Mr Hasachai identified the man who sold him the drugs. Police declined to name the dealer, who is allegedly operating in Rawai.