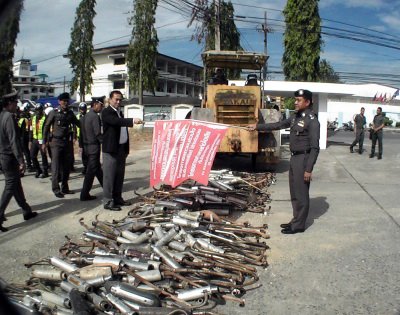 “The destruction of these pipes is part of a greater Royal Thai Police campaign to stamp out illegal [exhaust] pipe modifications,” said Maj Gen Nantadech.

Krabi City Traffic Police Piyarat Buakhao, who is in charge of the project locally, said that many youths created excessive noise by fitting non-standard exhaust pipes to their motorbikes.

“Some youths handed over the illegal pipes to police. Other modified pipes were confiscated after arrests. We will carry on with checks for illegal pipes to put a stop to the noise pollution they make.” Lt Col Piyarat said.