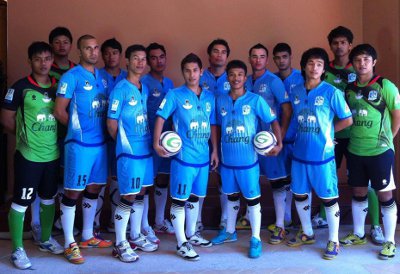 Goals were scored by both of the club’s foreign players – Brazilian duo, Rogerio Moreira and Jackson Santos – as well as Thai player, Nattaphong Buachary.

After the game, Jackson Santos told the Phuket Gazette: “Tonight’s game was a little difficult at the beginning because the team had not played an official game over the last month. Our strategy was focused on defensive marking, and the goals resulted naturally.”

“Our aim was to not concede any goal, and we were successful. Our goalkeeper [Parinya Pandee] had a real good game.”

Asked about the opponents, he said, “They were an alright team, but without much experience. At first they pressed us, marking, but we knew the exit… We had good control of the game.”

The win puts puts the “Andaman Pearl” in 6th place of the 16-team league, and follows them losing to the to Highways Department Futsal club in the season debut last month.

Following that season opener, league play halted for the FIFA Futsal World Cup 2012, which was hosted this year in Bangkok and Nakhon Ratchasima from November 1-18.

With the World Cup concluded already (Brazil having claimed their fifth of seven titles with a 3-2 victory over Spain) futsal fever in Thailand will now shift to the GMM Sport Thailand Futsal Premier League (TFPL) 2012-2013 season.

Other TFPL results from last night are as follows:

Phuket United will next play this Saturday, November 24, in their inaugural home match in the TFPL.

To kickoff at 7pm, the match will be played at Phuket’s brand new, 4,000-seat Indoor Sports Complex at Saphan Hin.

For more information about the team and upcoming season schedule, pick up a copy of the Phuket Gazette, out on stands this Saturday.

Phuket FC get new head coach ahead of next season