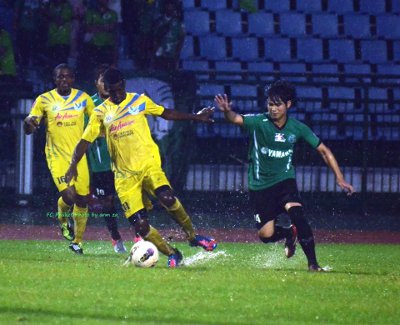 By the time the Andaman Eagles started warming up at 5pm, Surakul’s waterlogged pitch had already been soaking in steady rain throughout much of the day.

Despite being perched high in third place of the TPL Yamaha Division One league table, Krabi would not be taking 13th placed Phuket lightly.

Krabi was well aware of Phuket’s recent good run of form, including its 3-3 draw in a friendly game against premier league team Wuachon United, an 8-1 trampling of hapless Chanthaburi, and 2-1 win over Bangkok FC.

Krabi had a lot more than derby glory to gain from a win. If Ratchaburi Mitrphol lost their Saturday evening match against 5th placed PTT Rayong, Krabi would soar to the top of the table for the second time this season.

As the Andaman Eagles could be seen warming up long before the home side, early-arriving fans – largely decked in yellow – knew they were in for an exciting evening despite the grey atmosphere.

By the time the Islanders took to the field, close to 6pm, much of the covered stands were already full of Krabi supporters.

Despite the rain, the official attendance for the game was a reported 3,200, making it the highest home turnout for Phuket so far this season.

The two Southern sides’ supporters set up their cheer bands in dry sections on opposite ends of the sheltered stands: Phuket’s ‘Hulk’ on the north, Krabi’s ‘Energy’ on the south. Despite the differing allegiances, both sides used the same selection of songs to cheer their players on.

As all the choice covered seating was filled early, Krabi’s late-arriving cheer squad ‘Yellow Blue’ set up base next to Phuket’s iconic ’12th man’ fan club shirt, with Phuket’s ‘Hardcore’ faithfully in their usual spot exposed to the harsh elements – just like the players.

At first, it wasn’t clear which side a large number of neutral-appareled spectators supported.

All became clear in the 77th minute, however, when Thaweepong lived up to his expectations as team leader and earned his second goal of the season, beating Alonso at the near post.

Indeed, the ensuing celebrations revealed that the visiting team enjoyed as many supporters in the stadium as the home team.

They had a good deal to cheer about too. Up a goal, Krabi continued to dominate as they had throughout much of the match, enjoying almost all of the scoring chances and giving Phuket keeper Alonso Da Silva a real workout.

Keeping up the pressure, Krabi looked likely to seal the match. Phuket beefed up its own attack, replacing defensive stalwart Nenebi in the back with forward Ibrahim Kanoute. Under current TPL rules, each team is only allowed to field just three non-Asians at the same time.

But even the highly-skilled Ivorian, on loan from Muangthong United, struggled to adapt to the swampy dynamics of the waterlogged pitch at Surakul Stadium, where passes stopped dead in the wet.

Just as hopes were starting to dim for the Islanders, Phuket captain Thawin Butsombat was taken down inside the penalty area by Krabi keeper Anusorn Chansod. Phuket FC fans were ecstatic when the referee pulled out the yellow card and a penalty shot was awarded.

The mood was instantly reversed when the low shot by Phuket’s leading scorer Wacharakorn “Bird” Klaithin was blocked by Anusorn, which sent the Krabi fans into an energetic eruption of cheers for the second time that night.

Despite five minutes of extra time and forays up-field by the towering Da Silva, in a desperate attempt to equalize, Krabi held on to win the game and collect all three points.

The result saw the Andaman Eagles move up to second place of the table, two points behind Ratchaburi, who maintained their league reign with a 5-3 home win over PTT Rayong.

Suphanburi FC also maintained momentum, moving up into 3rd place with a convincing 3-0 victory over Bangkok United and remaining just one point behind Krabi.

Draws by Saraburi (away against Rajpracha) and Phatthalung (home against JW Rangsit) resulted in Phuket dropping back into the five-team relegation zone. They now occupy the 14th place in the 18-team bracket.

Phuket’s first cup game was a 1-0 win at Sa Kaeo City back in May.

The other two southern teams in Division One, Songkhla FC and Phatthalung FC, will have home ground advantage in their respective league cup matches against premier league contenders, TOT SC and Bangkok Glass FC.

Victorious or otherwise, Phuket will waste no time in travelling from the capital down to Rayong to take on PTT Rayong on Saturday.

Following their loss to Ratchaburi, PTT Rayong are in 6th place.

Phuket are set to return home to conclude the season’s first leg with another tough regional rivalry match against Songkhla FC on July 22.

In 10th place with one game in hand, Songkhla – who beat Krabi 2-0 at home back in March – will be the subject of yet another showdown at Surakul Stadium on July 22.

Rain or shine, thousands of fans anticipate watching live the keeper face-off between Phuket’s Brazilian tower Da Silva and Songkhla keeper Jonathan Matijas, who was a crowd favorite at Surakul last year when he played for Phuket .

Drugs seized in Phuket revealed to be “normal” crystal meth