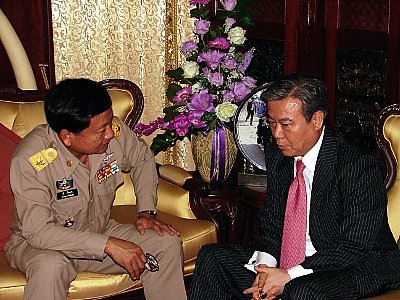 Kwang Sik Chun, Chairman & CEO of Korean firm Jung Yong Development Corp (JYDC), said his company would like to invest in the project, starting with a pre-feasibility study on the two proposed routes: from Chalong Circle to Phuket Airport, and from the airport to the International Convention and Exhibition Center (ICEC) in Mai Khao.

A co-operative venture between JYDC and an American company has earmarked US$4 billion fund for the project and is prepared to use part of it to conduct an initial project study, said Mr Kwang.

Researchers could begin the study as soon as an memorandum of understanding (MoU) was signed, he said.

Mr Kwang invited a Phuket delegation to visit Korea to see firsthand other projects already completed by the firm before inking any deal.

He noted that Phuket officials signing a contract with JYDC would mark his company’s first endeavor in Thailand.

It would not be the company’s first international venture, however.

JYDC has built a cement plant and developed a golf course in Vietnam, and constructed a dam in Pakse province in Laos, he said.

“Phuket has good potential for us to expand our business,” said Mr Kwang.

“JYDC wants to create a light rail system with safety and the environment in mind,” he said.