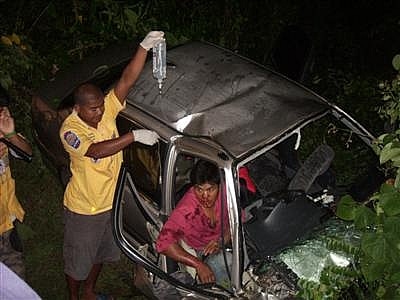 PHUKET: Four Thai AirAsia employees were seriously injured early this morning when the car they were riding in crashed into a power pole in Thalang.

The accident, reported at 2:10am, occurred about 200 meters from the Mae Ju souvenir shop on Thepkrasattri Road northbound in Thepkrasattri subdistrict.

A rescue worker reported there was heavy rainfall and flooding at the time of accident.

The fourth victim, a male whose name was not released, was unconscious and in the most serious condition.

Kusoldharm Foundation workers had to use jaws-of-life cutting equipment to free the driver from the wreckage.

Phuket Live Wire: iPad2 in Thailand is a steal