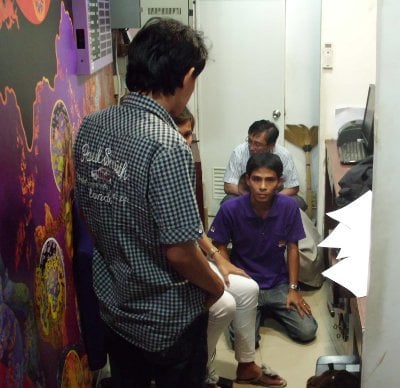 PHUKET: Two staffers at a currency exchange kiosk in the popular Phuket tourist area of Karon Beach were bound and gagged and robbed at knife point of mixed currencies with a total value of about 2 million baht last night.

Amnard Ponpramun, 27, told the Phuket Gazette that he and his colleague Wilaiwan Khao-ong, 22, were closing up the Siam Commercial Bank currency exchange on Patak Road near Karon Circle at 8pm when the robbery occurred.

“We were opening the door to leave when a man pushed his way inside. He held a knife at my right waist,” Mr Amnard said while lifting his shirt to show light cuts on his body.

Mr Amnard described the man as about 180 centimeters tall, with a light beard and wearing a dark jacket.

“Then he used tape to bind Wilaiwan’s hands behind her back. He taped her ankles and mouth before forcing me with the knife to open the safe and hand over all the money.

“He put the money in a bag he was carrying, then taped my hands, ankles and mouth, just like Wilaiwan, before running away,” Mr Amnard said.

“We soon worked ourselves free and ran outside yelling for help, but no-one seemed to understand what we were yelling about,” he added.

A woman working next door told Mr Amnard that she saw a man walk around the side of the kiosk, but she did not see him leave.

An investigator with the Chalong Police told the Gazette that the robbery took about 30 minutes.

Police at the scene said the CCTV cameras in and around the kiosk had not been able to produce a clear image of the robber’s face.

The camera fitted at the front of the kiosk was broken and although the CCTV cameras inside the kiosk were working, it was dark because the lights were off, one officer said.

Meanwhile, CCTV cameras positioned across the road could not clearly show the robber’s face due to the poor light in front of the exchange, he added.

Chalong Superintendent Col Krittapad Dej-intorrasorn told the Gazette that, “The suspect is probably a local person as he spoke in clear southern Thai [dialect] and he seemed to know the place very well.

“We are likely to have a composite sketch of him ready by tomorrow [Sunday],” he added.