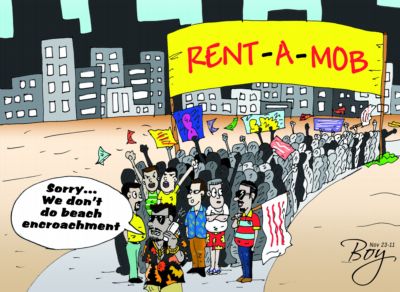 PHUKET: The hundreds of Baan Kho En villagers who formed a mob and commandeered the southbound lanes of Thepkrasattri Road in Phuket last week all knew one thing: they had been down this road before.

The tragic, avoidable deaths of Anupong Sae-Yu and his aunt Malai Kaewkluan were only the latest deaths on the notorious stretch of road, known locally as the “100 bodies curve”. Yet this latest incident was enough for the community to unite and demand action from the government to make the curve safer.

This week’s mob followed a mass protest by the same villagers in 2006 after Yam Chanwong, 55, was killed when her motorbike was hit by a pickup truck.

Like the incident this past week, the mob in 2006 forced the closure of Thepkrasattri Road and attracted instant attention from Provincial Hall. In both incidents, though years apart, the mobs disbanded only after a vice governor arrived in person and agreed that action would finally be taken.

In 2006, action is what they got. Their protest sparked a 15-million-baht project by the Phuket Highways Office to widen the road and reduce the angle of the Kho En Curve to make it safer.

In all this, one point of distinction must be made between the two mob incidents at Kho En. This year, although the mob stopped all traffic on the southbound lanes – they did not stop southbound traffic altogether. The police allowed southbound traffic to continue by using one of the northbound lanes, so traffic heading to the airport and points south could slowly seep through. No argument from the local villagers arose from that.

The villagers certainly disrupted traffic flow, but they did not hold the island to ransom by cutting off the critical link between Phang-nga and most of Phuket. The people of Kho En wanted attention and action, but not the disgust of their fellow Phuket natives who rely on that road for their livelihoods.

But what cannot be overlooked in this scenario is that elections were held in six sub-districts across northern Phuket – including in Baan Kho En – on the same weekend as the fatal accident. Just the day before the truck hit the motorbike the Baan Kho En villagers themselves went to the polls to vote for a new president of their sub-district.

The question arising here is: Why did the villagers feel it necessary to stage a mass protest and close the road when they had just elected a person to represent them in matters precisely such as this?

Are the polls failing the people at local elected government level? Or is it just a “fact” in the minds of the villagers that to get anything done in Phuket you need to orchestrate a mob?

If the latter, then why is it that we don’t see mobs forming to protest businesses encroaching on Phuket’s popular tourist beaches?

One dead, one injured in Phuket high-speed crash

Knife-wielding robber makes off with B2mn from Phuket currency exchange