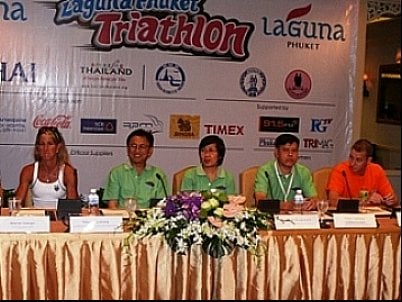 Guest speakers at the event held at the Dusit Thani Laguna Resort were led by Paiboon Upatising President of the Phuket Provincial Administration Organization (OrBorJor).

Paiboon expressed his delight with the success of this year’s event and offered his gratitude to all those involved with its organization. He also urged for more children to become involved with the sport of triathlon.

“We [the OrBorJor] have asked for schools to bring their students to the triathlon for support of the athletes and the event. I believe it is extremely beneficial for children to experience sports and inspirational to see these world class athletes perform,” said Paiboon.

Group Director CSR Operations of Banyan Tree Hotels and Resorts, David Campion was equally grateful for the success of the LPT.

He stated that the foundation of LSSP came from the hotel’s standing in the community and from athletes who regularly participate in the Phuket triathlon.

“Laguna has a tremendous responsibility and impact on the local community. Families and businesses rely on Laguna for employment so one way of developing that relationship is by teaching children the benefits of water safety. It’s the right thing for us and the community,” said David.

Defending women’s champion and two-time winner of the LPT, Belinda Granger, said the Phuket triathlon was one of her favorites and is very proud to be part of the 2011 event which has launched the LSSP.

“The LPT is one of the most professionally organized races I have the privilege of competing in. I’ve been coming here for eight or nine years and love the familiarity that has developed between my family, organizers and hotel staff,” said Belinda.

Speaking to the Gazette, Belinda was asked if she was concerned about competing against Radka Vodickova who she finished runner up to in 2009.

“I’m a realist. At 41, I’m not getting any faster and LPT is more about speed. Radka is not the same athlete she was two years ago – she’s twice as good. My money is on her tomorrow, but I’m going to ‘smash the bike’ and hope I can put some distance between me and everybody before the run,” Belinda said.

Tim Haddon, Laguna’s director of golf, has gone through an intensive six months of training under the watchful eye of Darren Hancock, manager of Royal Phuket Marina’s gym and tomorrow is their D-day.

“It’s been a fantastic journey. Darren has believed in me every step of the way when others doubted I could ever do it. Crossing the line tomorrow will be like an early Christmas present,” said Darren.

At 6:30am on Sunday morning the first wave of triathletes will beat a path through the sands of Laguna Beach for the start of the swim course with leaders expected to finish the run by 9am.

A cocktail party at 5pm, followed by an awards ceremony and banquet will celebrate the conclusion of LPT 2011 and the beginning of a week long festival of triathlon related events.

The Phuket Gazette and PGTV are sponsors of the Laguna Phuket Triathlon and wish all participants the very best for tomorrows race.

Knife-wielding robber makes off with B2mn from Phuket currency exchange