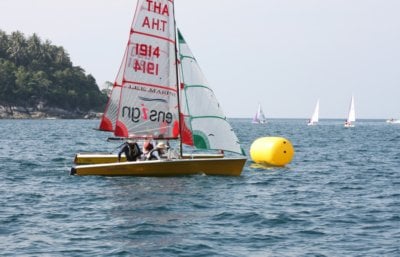 PHUKET: Action at the 23rd King’s Cup Regatta got underway over the weekend with two days of competitive dinghy racing off Kata Beach.

Now in it’s 22nd year, the event is Asia’s biggest and most popular regatta.

Inaugurated in 1987 to celebrate the 60th birthday of His Majesty the King of Thailand, the event has been held every year since then during the first week of December and has grown in stature with every passing year.

This year’s event boasts a record fleet of 110 boats in various categories, culminating in a grand final on December 5, HM the King’s birthday.

The regatta began life as an event with a strong dinghy presence back in 1987 and went back to its roots last weekend.

While the bigger yachts might make the headlines, dinghy sailing is popular in Phuket with foreigners and locals, and races are held regularly at Phuket Yacht Club in Cape Panwa.

The fleet that took to the water over the weekend comprised four Tasers, eight Lasers and four Topaz dinghies.

Six children from the Sunshine Village were given the opportunity to participate in this prestigious event courtesy of Topper Sail Phuket who donated the four Topaz dinghies.

The pairing of Jonas Johansson and Tanawat Sarawaree secured victory in the Topaz class and they were presented with their award at the King’s Cup opening party, held at the Kata Beach Resort and Spa.

In the Laser class, 16-year-old Anusorn Loywat emerged as the winner, beating off seven other challengers to claim first prize, but it was the Tasers which provided the most competitive racing of the weekend.

After a series of tight races, the pairing of Phil Lawson and the Phuket Gazette‘s own Thanasorn ‘Nid’ Chookate were crowned the eventual winners, pipping Andrew de Bruin and Donna Stephens to the post.

Ms Thanasorn was delighted to get her first taste of King’s Cup action.

“I have been sailing for six years but this is the first time we have won anything at a major regatta,” she said.

“There wasn’t a lot of wind to start off with, but it picked up and it has been a good two days of racing.

I know the King’s Cup used to have dinghies and I think it’s good that they’re back again. I hope we will be able to race again next year.”