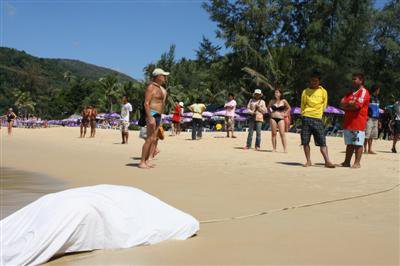 PHUKET CITY: The body of a man presumed to be a foreign tourist was pulled from the sea off Karon Beach earlier today.

Chalong Police were notified of the body’s discovery by staff at Le Meridien Phuket Beach Resort around noon today.

Phuket Ruamjai Kupai Foundation workers used one of the resort’s boats to recover the floating body, which was discovered about seven kilometers offshore.

Chalong Superintendant Chinnarat Rittakananond was among those present to examine the body.

The site of the decomposing body coming ashore put fear into tourists at the popular beach, causing many to come out of the water.

The man’s body was sent to Vachira Phuket Hospital for further examination and identification.

Police initially suspect the man was Caucasian due to his height (about 180cm), light complexion and stocky build.

Police estimate the man died by drowning about two or three days earlier.

Blood had discharged from his ears and mouth, but there were no signs of other injury to the body.

Police are now collecting data and checking missing persons reports to try and find out his identity.