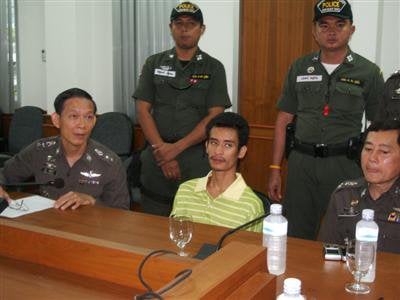 Suwit Maengsri told police his 50-year-old lover Tubtim Saehak – Mr Yamada’s wife – was not involved in either the killing or the disposal of the body.

They are charging both Mr Suwit and Mrs Tubtim with conspiracy to murder and dispose of a body, among other charges.

Chief among their reasons for doubting Mr Suwit’s story is the testimony of Wichit Mapan, who witnessed the burning of Mr Yamada’s body inside his Honda Civic car.

Mr Wichit claims he heard a voice say, “We can’t go any further, it’s a dead end,” shortly before the car was set alight.

Understood to have ruled out a friend of Mr Wichit’s as the accomplice, police now suspect Mrs Tubtim of being present when the car was torched.

Mr Suwit and Mrs Tubtim are believed to have met in July this year, while Mr Yamada was in Japan.

By the time Mr Yamada returned to Phuket in late October, the two accused were lovers, police said.

Mr Suwit has told police he resolved to kill Mr Yamada after hearing Mrs Tubtim’s stories of her appalling treatment at the hands of her husband.

He sometimes ordered her to find him prostitutes; if they did not satisfy him he blamed her and beat her, she has alleged.

Mr Suwit said that about a week before the killing he told Mrs Tubtim of his plan to kill Mr Yamada.

He claimed Mrs Tubtim tried to persuade him not to do it, but he ignored her pleas.

At around midnight on Monday, having already scoped the house earlier in the evening, he sneaked inside.

He found Mr Yamada asleep on the sofa.

He said he grabbed a crowbar from the shoe cupboard and hit Mr Yamada twice in the face, knocking him unconscious.

He used some cloth to bind the old man’s wrists and feet and pulled him onto the floor.

When the victim woke up, Mr Suwit stabbed him in the leg with a knife, before stealing his cell phone and fleeing the scene.

Mrs Tubtim called him on Tuesday to say Mr Yamada was dead, he claimed.

He returned to the house to clean up traces of the killing, covering the body with a blanket but leaving it at the house, he said.

He went to meet Mrs Tubtim, who sold a gold necklace and gave him the proceeds, 30,000 baht, to escape with.

On Wednesday he returned to the house at 3am to dispose of the body.

He hauled Mr Yamada’s corpse onto the passenger seat of the married couple’s Honda Civic, driving it to a quiet lane in Chalong Village 7, he said.

When the car got stuck in mud, he became worried it would be seen by someone, so he set it on fire, fleeing the scene via a nearby rubber plantation.

Mrs Tubtim picked him up at 12pm that day, driving him to the Sarasin Bridge, he said.

His lover tried to persuade him to flee the island but he refused, saying he was worried about what would happen to her, he claimed.

Instead, he persuaded her to drop him off at The Valley housing development in Cherng Talay, Thalang.

He stayed there in hiding until his arrest on Saturday.