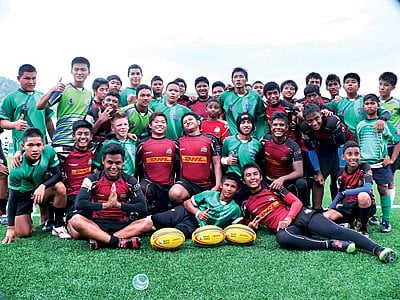 PHUKET: As waters continue to inundate Bangkok and travel advisories assist with reduced visitor numbers to Phuket, it was a privilege to see the efforts made by a few rugby playing schools and organizations to travel and participate in the first Phuket Lomas International Youth Rugby Tournament hosted by Thanyapura Sports and Leisure Club (TSLC) recently.

King’s College from Bangkok secured the inaugural title after a tense final encounter against Centaurs RFC of Singapore. Two breakaway tries late in the second half gave the Bangkok boys a deserving 12-0 victory and their spirited celebrations went on well into the evening.

A tough DHL Ta’Moko RFC side from Singapore extinguished hopes of local success, defeating the Phuket Lomas in the Plate final by 10-0, while in the Bowl final, Krabi were victorious over their southern opponents, Surat Thani, scoring three unanswered tries (15-0).

King’s College Bangkok also took the U13 title, beating a small but utterly determined Phuket Lomas side. Event organizer Pat Cotter was extremely pleased with participation numbers for the tournament. “The day went very well. Thanks to all the teams who came to Phuket, especially as traveling to Thailand is not easy at the moment. Let’s hope this is the first of many of these tournaments,” Pat said to the Phuket Gazette.

However, the excellent standard of rugby and organization was only part of the story. In last week’s Gazette, our rugby article reported that several teams had withdrawn from the competition due to flooding and the forecast difficulty in traveling. But in the true spirit of the game, King’s College Bangkok decided to travel despite negative travel advisories, and their efforts were truly rewarded.

Rugby, and sport in general, is the perfect medium for youth development programs such as those provided by the Phuket Lomas and Plate winners DHL Ta’Moko from Singapore.

Program director for Community Outreach Rugby Development Ltd (CORD) in Singapore and head coach of DHL Ta’Moko Daniel Khor detailed the benefits of their efforts to the Gazette.

“We have been working with youngsters from less fortunate backgrounds for five years. The boys that traveled to Phuket came to us when they were 10 years old with no rugby experience and now, not only are they good players, they are passionate about the game,” Daniel explained.

“Our goals are simple. With the support from our founders, DHL, we help them improve their school grades, develop confidence and build characters – all through rugby.

Ta’Moko’s passion for the game was evident during the tournament. Having lost the semi-final to King’s College, the boys huddled in disappointment and only a rousing post game pep talk from coach Sean lifted them from despair.

Once the awards ceremony had concluded, Tim Lambert, managing director of Centaurs Group, stepped forward and brought the day’s activities to a fitting close by presenting the Phuket Lomas with a bag of rugby kit for the players.

These donations have been ongoing from the Centaurs of Singapore for some time, and fuel the solid sporting relationship between the two organizations with a view to developing youth rugby in South East Asia.

Training tips for the Phuket Triathlon – fuel for your body

Phuket not alone in problem of abandoned babies