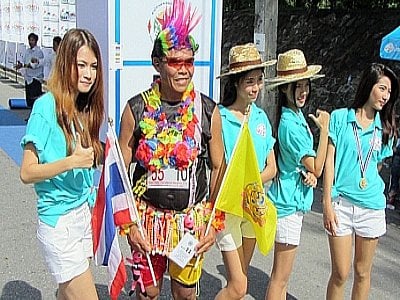 PHUKET: Kenyan runner Sammy Ridrond won the open division of The Phuket Health International Marathon in a time of just over 2 hours, 35 minutes this morning.

The 42-kilometer event, which got underway at 4am at the Mai Khao Tambon Administration Organization offices, finished at Phuket Provincial Hall in Phuket Town.

Two other events, a 13-kilometer mini-marathon and a 4.5-kilometer fun run, started at Provincial Hall and finished in the same location.

The runner-up in the open 42-kilometer event was Suwat Paiboon, a sergeant in the Royal Thai Army Fourth Area.

Nattakorn Yamburuang, an officer at the Public Public Health Office, said some 1,200 runners took part in the three events, with running enthusiasts coming in from all over Thailand to take part.

One of these was Nareeya Phonprasop, who crossed the finish line in just over five hours, 15 minutes to win the women’s 50+ category, and fifth overall among the women in the 42-kilometer race.

One of the most colorful contestants was 55-year-old Surachat Pakdeephet of Khon Kaen, who had a multi-colored mohawk and carried Thai and Royal flags over the entire distance, which he covered in under six hours.

More information and results about the race will be posted on the marathon website: www.phukethealthmarathon.com