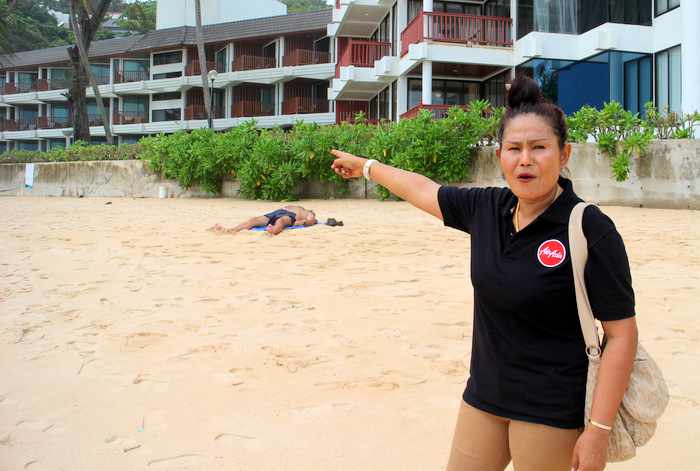 PHUKET: A team of officials descended on Kata Noi Bay late yesterday afternoon to inspect a battery of rocks in front of the Katathani Phuket Beach Resort that were alleged to be encroaching on public beach land.

The inspection, led by Suthee Sirianan, the Chief Administrative Officer of Muang District Office, was launched after local villagers filed a complaint through the national complaints hotline 1111 in Bangkok.

Local villager Sunisa Tubkaew told the Phuket Gazette that she saw a backhoe install the rocks, which line the beach for about a kilometer, many years ago.

“There used to be a pond and a canal here,” she said. “I do not know how they [resort operators] could apply for a land title for this site. The bay should have a curve, not be straight like this.”

However, Ms Sunisa pointed out that the remnants of other small walls along the beach was actually the work of local beach operators.

Ms Sunisa rented out sun loungers on the beach until the Army-backed cleanup last month put her, and many others, out of work.

Any expectations of immediate action were waylaid, as Mr Suthee explained, “From this inspection we cannot tell if the rocks were placed there or if they were a part of the beach in the first place.

“The resort owner, Sombat Atiset, said he couldn’t remember how long the rocks had been there, but added that perhaps the backhoe was brought in to move the rocks to make the beach safer.

“As long as the rocks do not pose a public danger, it is not an urgent issue.”

Mr Suthee said his team will meet at a later date to discuss whether any further action would be taken to investigate the complaint.

“But for me, I think these rocks look like a natural part of the beach,” he said.

Mr Winai told the Gazette that he would file a report of his own understanding of the central issues involved in the complaint.