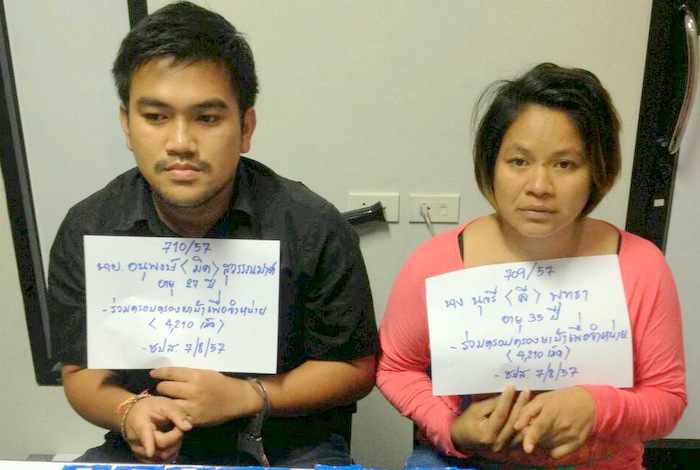 PHUKET: A mother arrested at a school car park in Phuket Town yesterday led to the “accidental” arrest of man who has since confessed to shipping millions of ya bah (methamphetamine) pills and kilograms of ya ice (crystal methamphatime) throughout Thailand, say police.

The string of arrests began on Monday, when officers took into custody Uten Wanthong for possession of ya ice, explained Lt Col Jaran Bangprasert of the Phuket Provincial Police.

Mr Uten was charged with possession of a Category 1 drug. In his statement to police, he named his supplier as Nuchjaree Phutha, 36, originally from Chiang Rai, Col Jaran said.

“We had him arrange to buy 10 ya bah pills for 2,100 baht from Ms Nuchjaree,” he explained. “The deal was to be made at a PTT gas station near the Wichit Municipality building on Chao Fa East Road.”

But Ms Nuchjaree said she could not make it in time as she had to pick her child up from school, so police waited at the school with Mr Uten in the police car.

“Mr Uten identified her while she was sitting in a pick-up truck, which was driven by a man,” explained Col Jaran.

“We moved in and arrested the pair, and found one packet of 10 ya bah pills in the front pocket of Ms Nuchjaree’s jeans. Inside the vehicle we found another package containing 10 more ya bah pills.”

The man arrested was identified as Anupong Suwannamat, 27, from Chiang Rai.

“We took them both to Ms Nuchjaree’s house in Soi Songkhun, Chalong, where we found two packages containing a total of 4,210 ya bah pills hidden in a bag inside a closet in the bedroom,” Col Jaran said.

Police also brought Ms Nuchjaree’s primary school child, a boy, along with them for the raid on the family home.

Ms Nuchjaree confessed to police that she had been selling drugs for a year, and that Mr Anupong was her supplier, Col Jaran said.

“Mr Anupong came to stay with her last Saturday, as he apparently had no place to go,” he added.

During questioning, Mr Anupong confessed that he had sold drugs for about 10 years, but that in the past four years he had started specializing in drug smuggling.

“Mr Anupong said that a man named Daeng from the same town in his home province introduced him to a big dealer in Mae Sai, also in Chiang Rai province, who goes by the name Ko Liang,” said Col Jaran.

“Mr Anupong used to smuggle up to 100 packs of ya bah, with each pack containing 2,000 pills, and anywhere between one to five kilograms of ya ice in one shipment.

“He would deliver the drugs from Chiang Rai to Nakhon Sawan Province, in Central Thailand, and was paid 200,000 to 600,000 baht for each shipment. Sometimes he was paid in drugs instead.”

Mr Anupong moved to Phuket last year and tried selling drugs bought from local dealers, but was cheated by the local suppliers and turned to his contacts in the North to go back into business, Col Jaran said.

“On July 26 this year, Mr Anupong was hired to transport 2.88 million pills of ya bah and 20 kilograms of ya ice from Kamphaeng Phet, in Central Thailand, to Nakhon Sawan,” Col Jaran said.

“He received 6,000 ya bah pills as payment. So he left the drugs at Ms Nuchjaree’s house and used the home as a base for selling the pills. That was until yesterday evening.”

Mr Anupong and Ms Nuchjaree were both charged with possession of a Category 1 drug with intent to sell.

Both face a possible sentence of the death penalty for dealing in such large volumes of drugs.

“They were handed over to the Phuket City Police for further questioning,” Col Jaran said.

Police contacted the father of the child, a hotel worker in Phuket, to inform him of the situation.