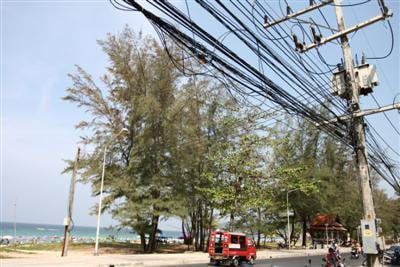 Work is scheduled to begin in July and to be completed by the end of the year.

At a joint press conference held yesterday, the PEA and Karon Municipality announced that the 1.9-kilometer conduit will cost around 43.6 million baht.

The project will be jointly funded, with the PEA paying 24.2 million baht and Karon Municipality the remainder.

The work contract is divided into two parts. The construction engineer will sign an agreement with Karon Municipality, while the PEA will enter into a separate contract for provision of new power lines.

The PEA has already researched and designed Phase Two of the project, which will extend the conduit 600 meters to Kata Noi. Phase Two work is slated to begin in 2010.

The announcement is the second of its type on the island in recent months, following the December 22 signing of a memorandum of understanding between Phuket City and the PEA to bury power lines along a 300-meter stretch of Thalang Road in Old Phuket Town, at a cost of 11 million baht.