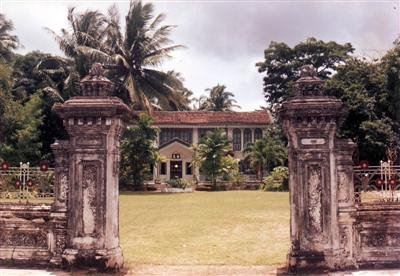 PHUKET CITY: A 105-year-old Sino-Portuguese wall in Phuket’s old town was demolished by construction workers on February 3 to make way for commercial buildings.

The wall, on Krabi Rd, had formed the perimeter of Prapitak Chinpracha estate, built in 1904.

On February 3, Capt Bunyarit Chaisuwan, an archaeologist at the Fine Arts Region 15 Office in Phuket, received a report that part of the wall had already been demolished.

He called project owner Wisit Ittiwarapornkul and tried to persuade him to halt the destruction, saying the wall was of historic interest and was protected by law.

Despite this, the wall was completely demolished later that day. Capt Bunyarit reported the incident at Phuket City Police Station, where it was recorded in the daily log.

Mr Wisit had purchased the land on which the wall stood from a senior member of the Tantawanit family at a cost of 28 million baht. Other members of that family were unsuccessful in buying back the land from Mr Wisit at a higher price.

Work on the project, begun last October, is expected to be completed by mid-year.

Old Phuket Town Foundation President Dr Prasit Koysiripong said the developer had made some concessions to make the appearance of the buildings attractive, such as by reducing them from four stories to three.

The Foundation will cite the incident in urging the municipality to establish new building regulations for the old quarter, he said.

Mr Wisit told the Gazette that he did not think it necessary to respond to concerns about the fate of the wall as he had bought the land legally and it was up to him how to develop it.

Parts of the wall were damaged before construction began, he said.

“I don’t understand why people are only now saying I’m a destroyer of archaeological finds when the issue should have been raised when plans for the new building were first announced over a year ago. If it was going to be a problem, I should have been given some kind of official notice,” he said.

Mr Wisit added that the municipality had long been aware of the plans to redevelop the site, which were detailed in the design plans posted at the construction site more than a year ago. The plan shows the two commercial buildings – and no wall.